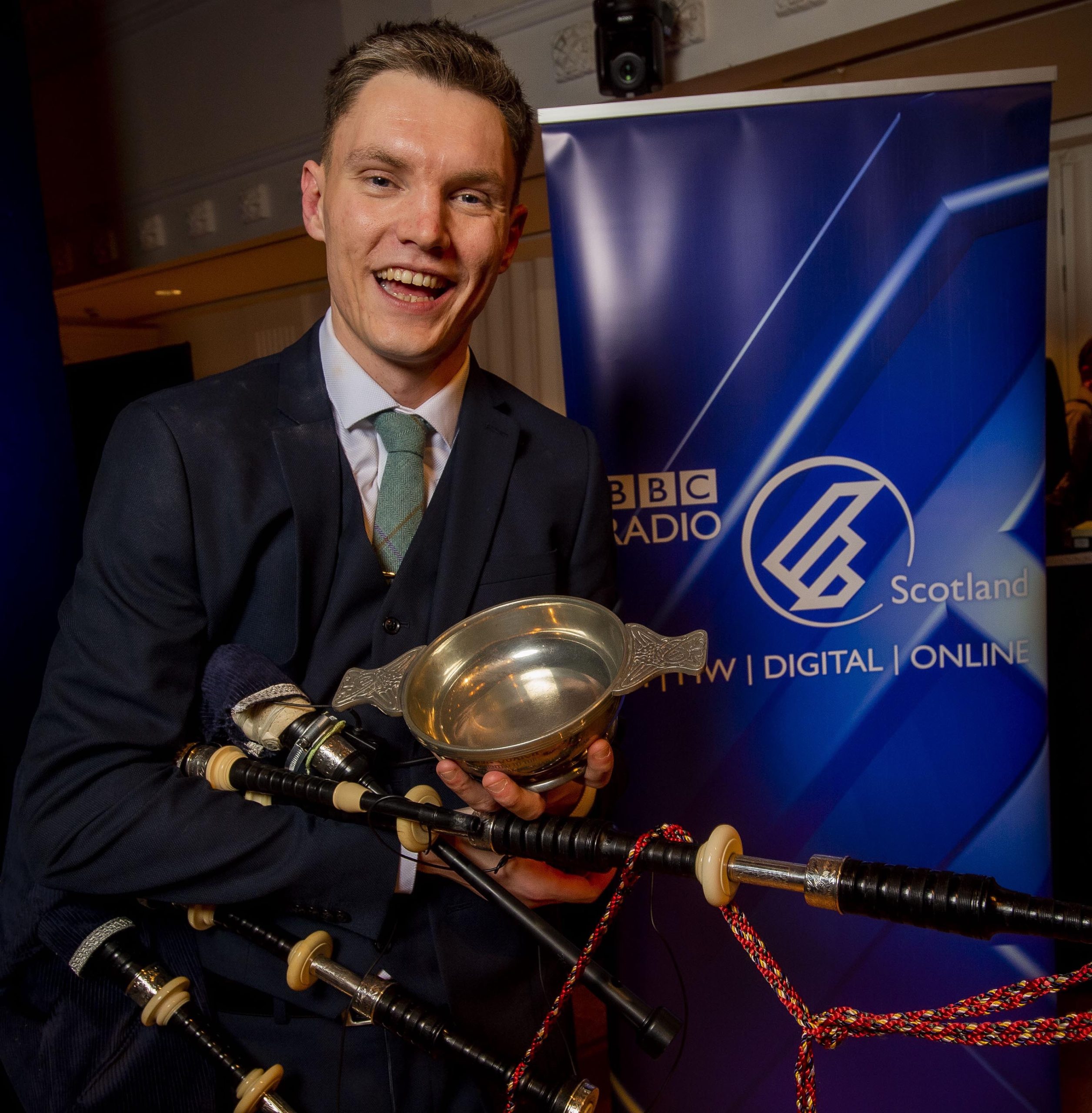 The 26-year-old, of Dingwall, accepted the award, now seen as the premier accolade for young musicians in their field, from Gareth Hydes, Commissioning Editor, BBC Scotland.

He said: “It’s such an honour to win – especially in this 20th anniversary year of the competition.

Everyone played their hearts out tonight and gave a fantastic performance which has made it such a special night. The competition was tough so I’m a little bit shocked to have won, but utterly thrilled.

“The past winners of BBC Radio Scotland’s Young Traditional Musician have gone on to do some amazing things so it’s really exciting to think what could lie ahead – 2020 is going to be a very exciting year.”

Each of the six finalists gave a rousing performance, broadcast live on BBC Radio Scotland and BBC ALBA as part of Celtic Connections.

But Ali had the edge during an evening of superb entertainment.
Gareth Hydes, Commissioning Editor, BBC Scotland, said: “It’s been a really special evening celebrating 20 years of this award. All the finalists were superb and the judges faced a very difficult decision.

“Ali’s performance personifies everything we want to celebrate about traditional music – it was vibrant, showed fantastic spirit and had the audience truly captivated. We want to wish Ali huge success for the future.”

A finalist once before in 2018, Ali is considered one of the leading instrumentalists on the traditional music scene. Winning accolades for his competitive piping from an early age, he’s also a master of the whistle and his unorthodox technique as part of band Project Smok has been getting him noticed in recent years.

Previous winners of the award who have gone on to make a big name for themselves on the trad scene include last year’s winner, fiddle player Benedict Morris who joined the BBC Scottish Symphony Orchestra on stage at last Septembers BBC Proms in the Park Scotland at Glasgow Green.

This 20th anniversary year of the competition also saw Benedict join previous winners on stage for a momentous celebration concert as part of Celtic Connections.

Organised by BBC Radio Scotland, the Young Traditional Musician of The Year competition has increasing the profile of Scottish traditional music and recognising rising talent in the genre since 2001.

Footage and live performances from the finals, including the winning performance, can be seen at bbc.co.uk/youngtrad
The other 2020 finalists were:

Josie Duncan, 24 – Voice (Lewis)
Raised in the rich musical landscape of the Outer Hebrides, Josie Duncan has long been able to enthral listeners with her melodic and finely-honed approach to traditional song. Since graduating from the Royal Conservatoire of Scotland, she has performed across the globe.

Pàdruig Morrison, 23 – Accordion (Uist)
Pàdruig, from Grimsay, in Uist, performs regularly with Beinn Lee, and also with Causeway Trio (Radio 2 Young Folk Award finalists), as well as various solo projects. He has written several BBC Alba soundtracks, composes in the contemporary classical field, and is studying for a PhD in Composition.

Mhairi Mackinnon, 27 – Fiddle (Perthshire)
Fiddle player and teacher Mhairi is originally from Perthshire but now lives in the Highlands. She has a wealth of experience when it comes to performing, teaching and colaborating with musicians from all over the world. Playing the fiddle has always been her passion.

Calum McIlroy, 23 – Guitar, mandolin, voice (Aberdeenshire)
Calum McIlroy is a guitarist, mandolin player and singer from Elrick in Aberdeenshire. A student at the acclaimed Royal Conservatoire of Scotland, he has been tutored by highly-regarded musicians such as Kevin MacKenzie, Ali Hutton and Fiona Hunter. He fronts his own trio featuring Megan MacDonald (Eabhal, HEISK) on accordion, and Ruairidh Gollan on fiddle.

Cameron Nixon, 21 – Voice (Aberdeen)
Scots singer and fiddle player Cameron is currently in his final year of undergraduate studies at the Royal Conservatoire of Scotland, having previously attended Plockton Music School. He toured with previous Young Trad finalist Iona Fyfe in 2018 and has recently returned from playing in the Celtic Colours International Festival in Cape Breton.