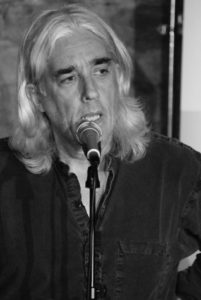 Thanks to David for sharing his thoughts with us. As a guitarist and songwriter was one half of The Cast (with Mairi Campbell), producing 6 albums, and is also a dance-caller and storyteller. Associate Director of TRACS (Traditional Arts and Culture Scotland) and Director of Scotland’s Traditional Music Forum. He compiled a report into traditional music for the Scottish Arts Council in 1999 and chaired the Scottish Government’s Working Group on Traditional Arts which reported in 2010.

He co-produces Distil, a long-running, creative development project for traditional musicians and is currently completing a Masters in Ethnology and Folklore at Aberdeen University.

Why did you become a musician?
I grew up in an incredibly rich period for music, and it was pretty much my major interest. I had some guitar lessons when I was a teenager, but didn’t really turn them to much account. I got into playing as a young adult by meeting up with some pals through Aberdeen Folk Club. We started playing for dancing, and things went on from there, primarily motivated by fun and community rather than money. I ‘became’ a musician when I realised that I was earning enough from it not to have to do anything else (although three cheers for Housing Benefit and the Enterprise Allowance scheme, which was my arts subsidy in the early days!). I don’t think of myself as being that great a musician, but music is a wonderful means of connection and communication, even when (or maybe especially when) it’s relatively simple.

What has changed about your music as you get older? Do you think about it differently?
I’m groping towards a better understanding of harmony now, although it’s an inexhaustible topic. I love crunchy chords, sharp elevenths and flat ninths and all that, but am a bit more judicious about how I use them. The main thing that’s changed is that the few things I can do reasonably well I can do a bit better. I sing more now than I used to, and am a bit less self-conscious about it, a bit less concerned about what people might think. When it comes to song-writing it feels like every new song is a blank slate, that no matter how successfully you’ve solved problems in the past, that counts for little as you wrestle with the task of bringing the new one to life. You do get the odd one that you don’t have to think about at all, that just comes skimming across the page from out of somewhere. You have to earn those though by applying yourself to the other ones!

What are the different aspects of your work?
I’m mostly a folk bureaucrat these days, working for the Traditional Music Forum and with its members on information and advocacy, policy stuff, development, but I still teach a guitar class for the Scots Music Group in Edinburgh, which I really enjoy. I’ve never stopped playing for dancing and am unlikely to, although the gigs aren’t as plentiful as they were (a lot more competition now). I’ve just finished working on the music for a community play and film at North Edinburgh Arts in Muirhouse. Recently I did an interesting piece of work with John Mulhearn and Calum MacCrimmmon, combining storytelling and music, and I hope we can do more of that and develop it further. Mairi Campbell and I are still a song-writing partnership, but I’ve written a few things of my own, which I performed recently at a house concert to the percussive accompaniment of my knees knocking…

What are your priorities as a musician?
Play in time, play in tune, and keep learning.

What are the major challenges you’ve faced making it as a musician?
The major challenge has been confronting a lack of self-belief and confidence in myself and my abilities. It’s taken a long time to get over that, and it’s still there to some extent. Even when people are positive there’s a ‘yeah, but…’ lurking that has to be pushed out of the way. Every time I get up on stage it’s a little victory.

As a guitarist my influences, however distortedly expressed, would be Freddie Green, Peerie Willie, and Jack and Rod from the Easy Club. As a songwriter I love the wit and style of the Great American Songbook writers, and Richard Thompson is my spirit-master.

Who are your influences and is there anyone in particular who is driving your work at the moment?
As a guitarist my influences, however distortedly expressed, would be Freddie Green, Peerie Willie, and Jack and Rod from the Easy Club. As a songwriter I love the wit and style of the Great American Songbook writers, and Richard Thompson is my spirit-master.

What’s the best advice you have ever had?
I think it was the American session guitarist, Tommy Tedesco, who said something like, there are three reasons for taking a gig: the money, someone you want to work with, or a new experience. Any one of those can be the deciding factor. It’s not always about the money.

What is next for you?
It’s in my mind to do a solo show that combines music and storytelling, not necessarily the type of thing Mairi Campbell and Karine Polwart have been doing, but the sort of thing you could do in a convivial space with just a chair, a guitar and a few willing listeners.

Thanks to David for taking the time to answer these questions. Read all our A Life In Trad Music articles. If you would like to keep up with all Hands Up for Trad’s news and events join the Hands Up for Trad newsletter. Remember and support musicians by buying their records and going to their performances.