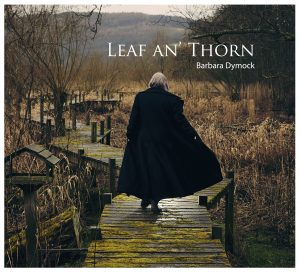 A fusion of styles and cultures, Child Ballad 79, The Wife of Usher’s Well is sung in Scots but set to a melody composed by Fatoumata Diawara from Mali resulting in an intriguing combination of comtemporary African music and rhythms with 17th century lyrics.

Scots singer Barbara Dymock based in Dundee was brought up in Fife, learning Scottish and Irish songs from her grandparents. Throughout the years she has sung in many different bands and combos including Ceolbeg, Rathlin, Palaver and Sinsheen. In 2011 she was nominated as Scots Singer of the Year at the Scots Trad Music Awards.

Leaf an’ Thorn is Barbara’s 2nd album, following on from the well-received Hilbert’s Hotel, released in 2011. Here she collaborates with multi-instrumentalist and producer Christopher Marra. Chris has been a musician since his teens, working in many distinct fields from bighair rock to sophisticated pop with Danny Wilson via London’s Theatreland. The majority of his time was spent recording and performing with his brother Michael Marra, producing albums for Michael and the legendary Saint Andrew. Chris has added a sprinkling of musicians to the album from multiple musical genres, which makes the thirteen tracks crackle with an air of diversity.