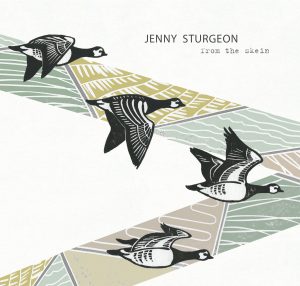 ‘Maiden Stone’ is the opening track on ‘From the Skein’, one of several songs on the album inspired by regional folklore. The Maiden Stone is a Pictish standing stone which is located at the back of Bennachie Hill, in Aberdeenshire, Scotland. This track tells the local tale of how the standing stone came to be and features the distinctive low whistle of Fraser Fifield, whose melody weaves around the vocals and the driving bass line, building tension and giving the song the timeless feel of an old ballad first sung hundreds of years ago.

‘From The Skein’ is the debut album from singer-songwriter Jenny Sturgeon.

Inspired by her home region, the north east of Scotland, Jenny explores themes of nature, legend, myth and everyday human experience as she celebrates a community that is both local and global. The songs and the range of musical influences they incorporate create a rich tapestry of varied styles and feelings that ebb and flow through the album – from local history and folklore through key life moments – and with a passion for the natural world, nature creeps in to all of Jenny’s writing.