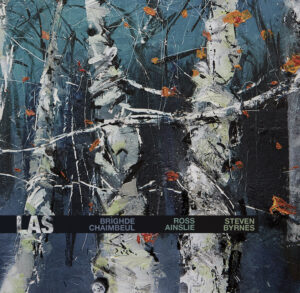 Multi award-winning Skye piper Brìghde Chaimbeul, acclaimed Scottish traditional musician and composer Ross Ainslie and Irish guitarist and drummer Steven Byrnes Haberlin have teamed up on the collaborative album LAS. Out Friday 2 September, the self-penned instrumental album is the first album of double C smallpipies to be released in the world.

LAS was recorded live and consists of a mixture of original compositions, traditional Scottish songs, and tunes from Bulgaria, Spain and France. Ross was inspired to collaborate with Brìghde when he heard her performing at the Radio 2 Folk Awards and after teaming up with Steven found the three artists made a harmonious partnership.

Brìghde Chaimbeul said: “It was brilliant to finally get into the studio after a two-year delay. Recording live meant we could capture the energy of the moment and it was great to do so after the last couple of years.”

Ross Ainslie said: “It’s unusual to hear the smallpipes played in the key of C so when I heard that, I knew I wanted to work with Brìghde. We met up a year later and started putting some tunes together and got Steven on board as well. Once we had everything in place the recording happened quite quickly. Making this album felt like going back to our roots in a way, it has been a very refreshing album to create and the main focus is definitely the pipes – it’s a very unique sound.”

Steven Byrnes Haberlin said: “We all spoke about how we’d like to record this album away from all distraction and to fully immerse ourselves into the project. That’s why we chose Sean Og’s studio, it’s in a remote location and we had no time restrictions. Some of the best moments are captured in the small hours and we had the luxury to do that on this album.”

The record includes standout tracks like the powerful majestic sounding Green Light Set, the cheery and light-hearted tune Dod’s and the dramatic and fast-paced Strathspeys and Reels.

Brìghde Chaimbeul won major media plaudits and five-star reviews for her 2019 debut album The Reeling, featuring her completely unique arrangement of smallpipe playing. She also performed for world leaders and listeners across the globe at the opening ceremony of COP26 in 2021.

Ross Ainslie is one of Scotland’s finest traditional musicians and composers, dubbed as “ridiculously talented” by The Herald for his playing of pipes, whistles and cittern. He is renowned for his highly acclaimed solo material, which was praised by Songlines as being “simply outstanding” and as a skilled performer and prolific collaborator who performs regularly with Treacherous Orchestra – of which he is a founding member – as well as artists that include Salsa Celtica, Dougie Maclean and Ali Hutton.

Steven Byrnes Haberlin is a guitarist and drummer from the southeast of Ireland who has recorded, collaborated and performed across the UK, Ireland and Europe with folk artists like Kate Rusby, Damien O’Kane, The Treacherous Orchestra and Hamish Napier.