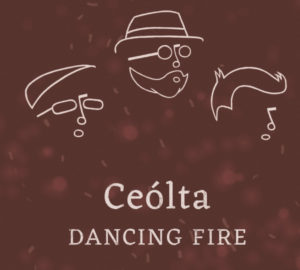 Based in the North of Ireland and formed in October 2018, Ceólta is an exciting group, whose members have many years of experience on the traditional scene. They produce a vibrant sound, playing an array of instruments on self -penned and traditional arrangements.
In the short space of time that Ceólta have been together, they have recorded an album, working with Seán Óg Graham of Beoga at Bannveiw Studios. The album, entitled “Dancing Fire”, will be released in August on all media platforms.
Ceólta’s three members, Ciaran Mulholland, Paul Mc Kernan and Mark Carmichael, contribute a wealth of experience to the Ceólta sound. Ciaran is a former finalist in the BBC Radio 2 Young tradition award, Paul holds 6 All-Ireland titles on the Uilleann Pipes, while Mark’s former band Camhanach won The Danny Kyle Celtic Connections Award in 2002.
Vocals, Fiddle & other stringed instruments / Ciarán Mulholland
Vocals, Uilleann Pipes & Whistles / Paul McKernan
Vocals, Bagpipes, Uilleann Pipes, Whistles, Guitar & Bouzouki / Mark Carmichael