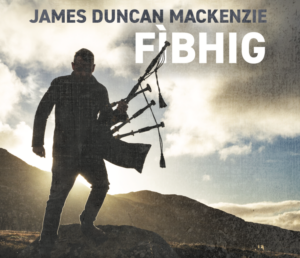 Cat and Mouse is the first single from James’ third solo album. The single features two tunes, The Trapper and The Midnight Mouse. The Midnight Mouse refers to an incident of a mouse in the house in the early hours!
Fìbhig was written and largely recorded from home over a two year period like no other. Named after a small village on the West side of the Isle of Lewis near where James lives. The tunes on the album are inspired by place, people and island life.

From Back on the Isle of Lewis, James is a graduate of the University of the Highlands and Islands and the Royal Conservatoire of Scotland where he studied on the Piping Degree course. During his studies in Glasgow, he played with the Scottish Power Pipe band under Chris Armstrong.

James toured extensively over the past several years playing festivals all around the world with Breabach. His debut self-titled album was well received in 2013 and was performed at international festivals including MIMO festival, Brazil and Festival Interceltique de Lorient in Brittany.  James is also a member of Tryst, a 10 piece bagpipe group, which is made up of Scotland’s top contemporary composing pipers