News > How can we get a million people to hear a Gaelic song live?’ 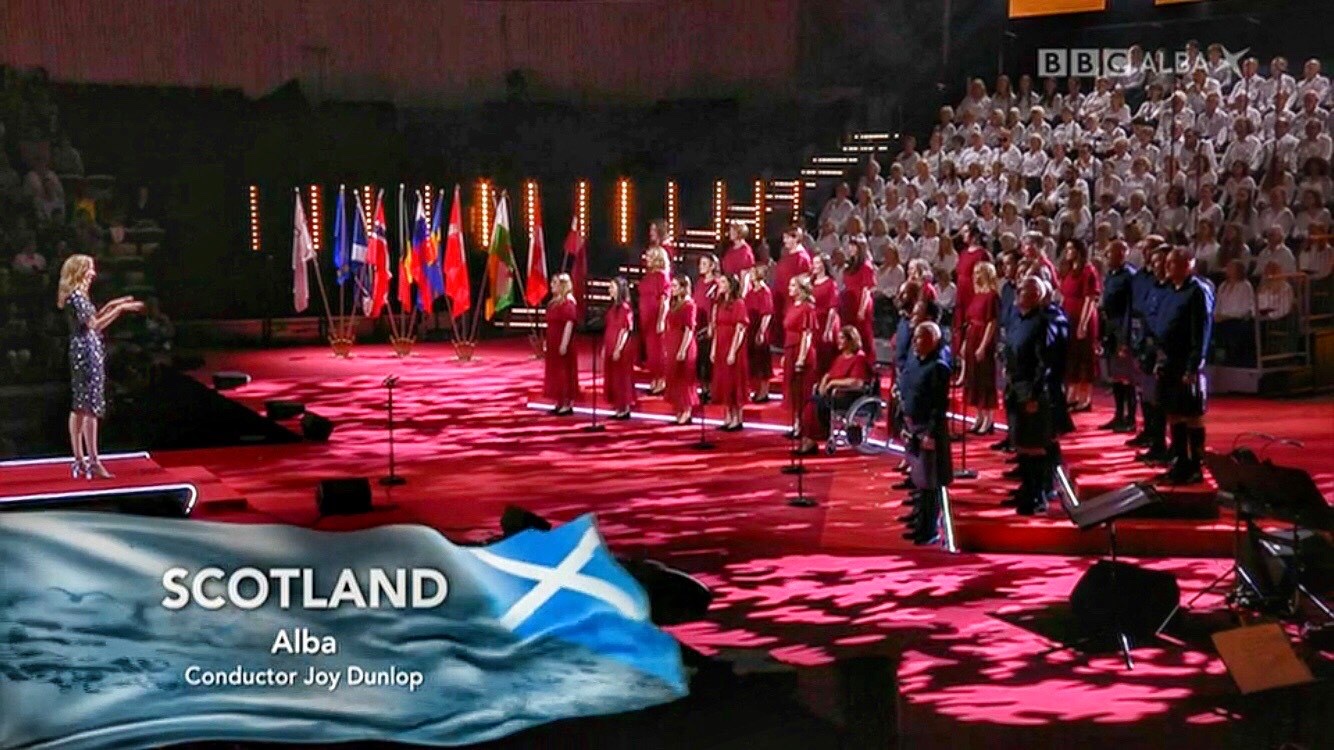 How can we get a million people to hear a Gaelic song live?’ – that was the question posed in a meeting at the BBC Alba offices that started the journey that finished with Alba Choir performing on the Eurovision stage.

Eurovision Choir had 10 of Europe’s best choirs performing a live song to impress a panel of international choral music stars. Blending spectacular staging and in front of a live stadium audience, Eurovision Choir was broadcast to millions across the globe, taking viewers on a journey of musical traditional and cultures from across Europe in search of the continent’s pre-eminent vocal group.

Not since 1966 and Kenneth McKellar had Eurovision seen a kilt on stage, but the 2019 Eurovision Choir would change all that. Conductor Joy Dunlop led a 33 strong choir who were chosen from existing Gaelic choirs across Scotland singing a specially arranged set of Gaelic tunes by Sileas Sinclair with both traditional and modern influences.

Joy said ‘I was so proud to conduct Scotland’s debut entry at Eurovision and that the language and music of Gaelic was heard by millions across the world, maybe for the first time.’ BBC Weather presenter Joy beforehand promised that her choir would ‘ take Eurovision by storm’ and they certainly did.

In their exclusively designed tartan, the choir sang Cumha na Cloinne, a piobaireachd – bagpipe music – composed by Padraig Mòr MacCrimmon around 1650 after the death of seven of his eight children from smallpox. This stirring composition was complemented by intertwining the Waulking Song ‘Ach a Mhairead’ where the woman in this song is dejected about a man with whom she was in love, saying that no kind of music will lift her spirits, with one of the most iconic modern Gaelic rock songs ‘Alba’ by Runrig.

Though Denmark would finally take the crown of Eurovision Choir 2019 winners, Scotland came home proud of their performance.

What was unique for a Gaelic choir was that not only did they sing, but choreography telling the stories of the songs was performed. Creating a visual spectacular on the Eurovision stage.

So what next for Alba Choir? Joy announced ‘We are so excited that the Alba Choir has agreed to continue performing together. We are all very proud that we will be on stage in George Square on the 11th of October at the opening of the Royal National Mòd which will be held in Glasgow for the first time since 1990.’