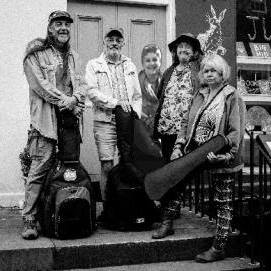 Wishful Thinking is a fiddler’s fantasy romance with a Cajun twist. It is part of the band’s first album, The Professors of Logic Come of Age, which can be streamed or downloaded on Bandcamp, iTunes, Spotify, Deezer and Amazon Tunes. The CD can be bought on Bandcamp. (professorsoflogic.bandcamp.com) There are 18 tracks in all, and the theme running throughout is the appraoch of old age. The genre could be described as Edinburramericana, with a strong trad undercurrent.

The Professors of Logic is a five-piece Edinburgh band, playing all original songs written and composed by Anna Durkacz Ryan, plus instrumentals by other band members. Anna started singing and writing songs in her late fifties, and takes a wry and humourus look at life from the safe vantage point of an older woman.