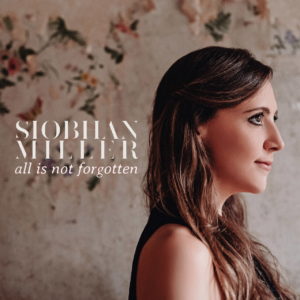 Following on from the slickly produced, mainstream-nudging 2018 album Mercury, this new release is a more stripped back affair, seeing Miller return to her roots. And where Mercury fielded all original songs All is Not Forgotten magically melds new and traditional songs in nine tracks with an overriding air of unrushed calm peppered with a touch of fun in the final tracks.

Produced by the team of Miller, Burton, Drever and Iain Hutchison the album was recorded at Gloworm Studio in Glasgow.

Siobhan Miller, one of the most captivating and successful singer songwriters to come out of Scotland in recent years, will release her fourth solo studio album in April and showcase it on a UK tour. Siobhan, with her soulful, burnished gold voice, has won the MG Alba Scots Trad Music Awards ‘Singer of the Year’ title an unprecedented three times alongside a 2018 BBC Radio 2 Folk Award.

In just a few short years, the multi-talented Midlothian-born performer, who won the 2008 Radio 2 Young Folk Award with Orcadian fiddler Jeana Leslie, has released three strong solo albums and, in another tangent of her career, appeared in TV drama series Outlander and sung in U.S. theatre productions on Broadway (Peter and Wendy) and in Boston (A Christmas Celtic Sojourn).