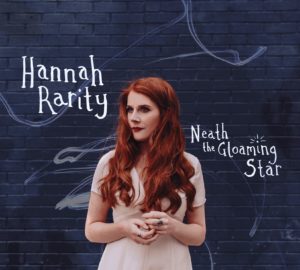 ‘Wander Through The Land’ is one of two of my own songs from my debut album ‘Neath the Gloaming Star’. The song took shape between 2016/17 after I graduated from the RCS in Glasgow. 2016 saw Brexit and Donald Trump come to the fore and after originally feeling optimistic about the future post graduation, the fraught political climate painted a pretty bleak picture of what the future was to be. For a temporary escape I booked a lengthy trip to New Zealand and quickly found that the country’s people, hospitality and landscape was pretty good medicine for any feelings of hopelessness.

Hannah Rarity’s sublime voice imbues the music she performs with a depth of emotion that is inimitable. It’s this ability that has seen her become one of Scotland’s foremost young singers. Winner of BBC Radio Scotland Young Traditional Musician of the Year 2018, her status as a rising talent has been further consolidated by her nominations the 2017 & 2018 Scots Trad Music Awards and feature as ‘One to Watch in 2018’ in The Scotsman. Her most recent release ,’Neath the Gloaming Star’, was shortlisted for Album of the Year at the 2019 Scots Trad Music Awards.

Her powerful vocals have been well-suited to her collaborations and performances with esteemed musical acts such as the Scottish Symphony Orchestra, Scottish Chamber Orchestra, her international touring with Irish-American band Cherish the Ladies, as well as national television appearances – BBC Hogmanay Live – and UK festivals & touring. “Absolutely sensational” BBC Radio Scotland / ★★★★ The Scotsman