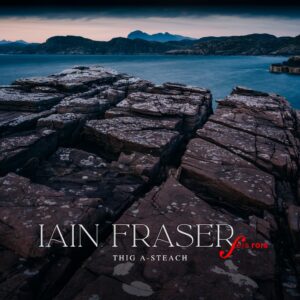 This single Thig A-Steach is the first track off Fèis Rois album ‘Gneiss” by Iain Fraser.

Fèis Rois commissioned Iain to write and record a new suite of music to celebrate the 30th anniversary of Fèis Rois nan Inbheach. The album takes its name from the ancient rocks underlying much of north-west Scotland, and draws inspiration from the places and people that have contributed to Fèis Rois’ development, whilst evoking the passing on of tradition.
credits.

Iain Fraser is a Performer and Teacher. He’s fascinated by the fiddle’s rhythmic and emotional capabilities and draws upon the extensive repertoire of traditional music ranging from 18th Century Scottish tunes to new self-penned compositions and from the multiple regional music styles of the British Isles to those of North America and Europe.

His teaching includes group workshops, helping people young and old pursue their musical dreams as well as making music a fun social experience available to all. Between 1990-1995 he took on and developed the Glasgow Fiddle Workshop from a small group meeting in his house to a broad range of classes operating in central Glasgow. He’s been actively involved and supportive of the Feisean movement for almost 30 years – primarily with Feis Rois. He was principal fiddle teacher in the Scottish Music Department of the Royal Conservatoire of Scotland between 1995-2005 before being appointed Head of Instrumental Music for the Scottish Borders Education Authority until 2011.
He has recently gained an MLitt in Folklore from the University of Aberdeen’s Elphinstone Institute.
He released “Touchwood” in 2002, he wrote ‘Scottish Fiddle Tunes – 60 Traditional Pieces for Violin” for the Schott World Music Series in 2006 and “Canadian Fiddle Tunes – 60 Traditional Pieces” by the same publisher was released in 2015. He won the Chorus Community “Passing it on – Educator’s” award in June 2017.