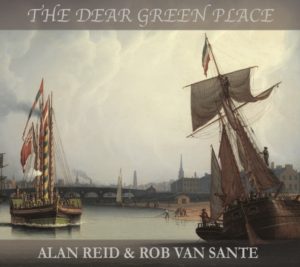 This song highlights the story of the origins of Glasgow, its later emergence as an important Atlantic port and its growth into industrial metropolis. The song expresses the hope that it can become again like its nickname, the dear green place.

Alan and Rob perform Scots song old and new on piano, guitars and accordion. They form an almost unique place in Scottish folk music with their close harmony singing , sensitive and imaginative arrangements and breadth of repertoire which showcases Alan’s writing talents. Alan was an integral component in the story of Battlefield Band, a member from their student group days and evolution to world travelling touring and recording band. In his 40 years or so serving with the Batties Alan recorded 25+ albums, honing his songwriting skills along the way. In 2000 he formed the duo with Rob, himself a fine singer and tasteful guitarist, as well as highly skilled recording engineer. To date the duo have released five albums, including two concept productions on Charles Edward Stuart and John Paul Jones respectively. Their latest album is ‘The Dear Green Place’ has just ben released and we have here the title track.