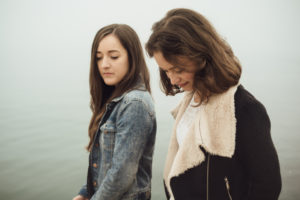 ‘Stop Talking About It’ is a song about talking versus doing. It’s about acting instead of obsessing — not lusting after, but being in the moment, not just talking about it! It is from Twelfth Day’s new ablum Cracks in the Room. It was produced by Chris Wood and mixed by Oz Fritz (Tom Waits) and is described as an extra-ordinary album, happily hard to define – and exploring lingering social stigma’s around being an outspoken, self-employed woman.

Twelfth Day are happy to be hard to define. Classically trained, they bring outstanding technical ability as well as an adventurous mix of folk, jazz and classical influences to their compositions and arrangements – blended with the folklore and inspirations of their respective Scottish Highland and Lowland upbringings.