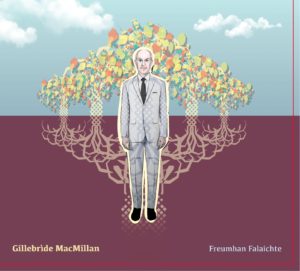 This song is in praise of the historic Galician city of Santiago de Compostela. The song, an original composition by Gillebride MacMillan in Gaelic and Galician, praises the place and its people and the pilgrims and walkers who go in their thousands every year on their Camino to Santiago. Gillebride is joined by Rosa Cedron on this track.

Gillebride MacMillan is from South Uist in the Outer Hebrides. A fluent, first language Gaelic speaker, Gillebride comes from a family with strong Gaelic song and music traditions – his father was an accomplished piper and his mother has a great knowledge of Gaelic songs and poetry. Gillebride learnt English in school and is now also fluent in the Galician and Spanish languages too.

Freumhan Falaichte is Gillebrìde’s third album – the first two being of traditional Gaelic songs – and this is his first self-penned release. As well as being a singer, Gillebrìde MacMillan is also a published writer, songmaker and poet and he has performed his self-penned songs and poetry internationally.
Freumhan Falaichte – Hidden Roots is the brand-new album from Gaelic singer, songmaker, poet and writer Gillebride MacMillan. Well-known for his role as Gwyllyn the Bard in Outlander, this real-life bard will release his most recent album on Friday 14 September.

All 11 tracks on this album are self-composed melodies and self-written lyrics in Gillebride’s native Gaelic. Freumhan Falaichte is a body of work that explores personal, societal and political themes, as well as Gaelic traditions and customs.

Gillebride MacMillan, said: “It is so important to me that Gaelic is alive and vibrant and not just seen as an old language with old songs. New compositions in the language are vital to its regeneration".