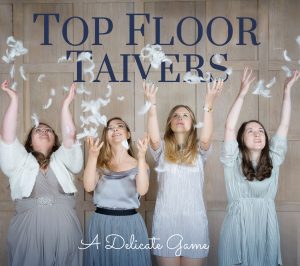 Taken from the debut album ‘A Delicate Game’, Princess Rosanna is a song by Scottish singer songwriter Findlay Napier. Findlay was inspired to write this song after seeing graffiti that said “RIP Princess Rosanna” whilst on a run along the river Clyde in Glasgow.

Nominated in the Up and Coming Artist category at the 2016 MG ALBA Scots Trad Music Awards, Top Floor Taivers released their highly anticipated debut album A Delicate Game in January 2017. With unique arrangements of traditional Scottish songs like The False Bride, to contemporary Scottish songs like Princess Rosanna by Findlay Napier, and Everybody Knows by Leonard Cohen, this exciting new album has something in it for everyone.

Since forming in 2013 the band have performed across Scotland and Ireland, with highlights including BBC Music Day, Stonehaven Folk Festival, Edinburgh’s Hogmanay Street Party, and Celtic Connections amongst others. In 2017 they will be touring their new album and will be performing a tour of Germany in 2018.

These four are incredibly talented. Certainly worthy of a lot more exposure. Four to watch out for.
FOLK RADIO UK