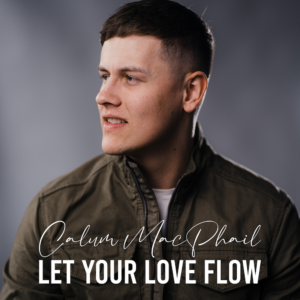 Highland accordionist and vocalist Calum MacPhail has announced his single Let Your Love Flow. Set for release on Friday 25th November, the cover provides a fresh spin on the classic 1975 country song from The Bellamy Brothers.

Calum, who is a member of award-winning trad folk powerhouse band Hò-rò, hails from Fort William and later moved to Inverness. He won the MG ALBA Scots Trad Music Awards 2021 Original Work of the Year for his single 7 Years Old.

Recently, Calum released his first video singing Dougie MacLean’s She Loves Me, with the song going viral on social media platforms. The energetic musician who released his debut solo EP in 2017 has performed in Italy, Belgium, France, and Germany.

Calum features on vocals and accordion on the single alongside Sean Cousins on acoustic guitar, Calum MacQuarrie on bass, Mark Scobbie on drums, Cathal Murphy on electric guitar and Ivan Steele on saxophone.

Calum MacPhail said: “I was inspired to cover this track because it’s one of my favourite country songs from The Bellamy Brothers. It’s an old classic country song that I have always heard and sung along with when on, it has a feel good vibe to it. I wanted to create a fresh sound to a classic tune.”

The single was recorded at GloWorm Recording Studios and was mixed and mastered by Ross Saunders in September 2022.

Let Your Love Flow will be available to download and stream on all usual platforms on Friday 25th November.

Calum’s upcoming album will be released in spring 2023.