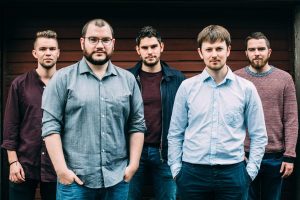 Kindled out of Manchester’s thriving music scene, new instrumental quintet Aizle – the Scots word for ‘spark’ – light the touch-paper under an inventive mix of new and traditional tunes. Aizle are made up of five highly respected musicians amongst the UK folk scene and have recently launched their debut EP at Celtic Connections 2017. Officially making the debut at 2015 Birmingham TradFest, the band look forward to performing throughout 2017 on the back of their new release.