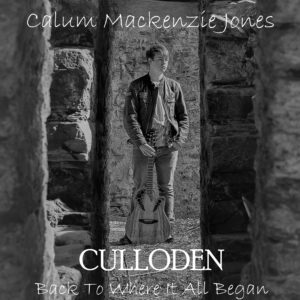 Scottish Folk Song about the Battle Of Culloden and the poignancy of the battlefield.
Lyrics,composition and all parts performed by Calum Mackenzie Jones.
Recorded, produced and mixed at Glachbeg Croft by Steve Bull Productions.
Mastered by Iain McLaughlin.

An engaging young singer-songwriter from Oran, Moray.
Creating original material with influences from Folk, Country, Blues, Traditional and Celtic Rock.
2017 was a great year for this young musician, with his debut single showcased by Jo Whiley on BBC Radio2, swiftly followed by a successful debut album and a Charity single raising over £2700.
He also hit the Festival circuit running, performing at numerous Scottish festivals including Belladrum, Eden, Killin (where he won the competition to open this year’s festival) Northern Roots & Speyfest.
Other highlights include performing to a packed Perth Concert Hall, In the great hall of Edinburgh Castle, With the Royal College of Music Manchester session orchestra and Supporting John Smith at Eden Court, Inverness
2018 is looking to be equally exciting having got off to a great start with a Highly Recommended performance on the Danny Kyle stage at Celtic Connections and the release of his Debut Folk EP. He has performances confirmed at Groove Cairngorm, March Into Pitlochry, supporting Skerryvore at The Arc Sessions, supporting Elephant sessions at The Ironworks, Inverness and many more still to be announced.