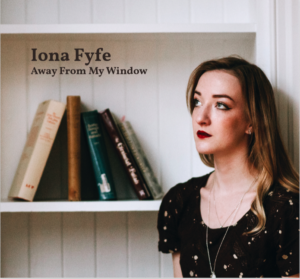 Taken from the album ‘Away From My Window’ out 24th March 2018
Pre-order the full album: www.ionafyfe.bandcamp.com

I first heard this song from fellow Huntly singer, Shona Donaldson, when she was a guest at Cullerlie Traditional Singing Week- end in 2016. Shona attributed it to the singing of Gordon Easton, who, at 84 years old, recorded it on his Springthyme album, The Last of the Clydesdales. It was also sung by Jock Duncan who recorded it on his 1996 album Ye Shine Whar Ye Stan! Jock learnt it from itinerant farm worker Jimmy McBeath in 1971.
A song of rejection, the Banks of Inverurie, echoes’ the form and structure of the American folksong, The Lakes of Pontchartrain. The de nite origins of the song remain unknown, but it is thought that it originated in Scotland and was brought to America by soldiers ghting for the British army in Louisiana and Canada in 1812. It could be argued that Aberdeenshire is the source region of the localised song, by its inclusion in Greig-Duncan and the song being set on the banks of the River Ury. It is also printed
in two Broadside forms: The Banks of Inverury and The Banks of Inveraray. The prints are the same, with the place name the only di erence. Until half way through the 19th century, Inverurie was spelt as Inverury. One version of the broadside uses the historical spelling of Inverury, which proves that the song existed before 1866, when the town clerk made the spelling change to Inverurie o cial, after post (and songs) got mixed up between Inverury and Inveraray, in Argyll. The Gaelic title for Inverurie is still Inbhir Uraidh, meaning “Con uence of the Ury”.
Found in Robert Ford’s Vagabond Songs and Ballads of Scotland, John Ords, Greig Last Leaves, Greig-Duncan (6:1263) Roud 1415

Aberdeenshire folksinger, Iona Fyfe, has become one of Scotland’s finest young ballad singers, rooted deeply in the singing traditions of the North East of Scotland. At twenty, Iona has established a strong voicing of place in her repertoire and was a nominee for Scots Singer of the Year at the MG Alba Scots Trad Music Awards. A finalist in the BBC Radio Scotland Young Traditional Musician of the Year 2017, Iona has been described as “one of the best that Scotland has to offer.” (Global-Music.de) and was the winner of the Molloy Award at The Trip to Birmingham Irish Trad Fest 2017.
Iona’s 2018 debut release, “Away From My Window” is a concept album, inspired by the source and revivalist singers of Aberdeenshire. Featuring archive clips of singers such as Stanley Robertson and Lizzie Higgins, Iona aims to showcase revivalism in folksong by creating a programme of modern interpretations of old ballads and self-penned songs in a traditional style. Whilst drawing on the work of Scottish songwriters such as Michael Marra and Aidan Moffat (Arab Strap), Iona aims to showcase the universalism of folksong in an inter-genre manner. Iona will be touring her album throughout the UK in March and will perform in Fergus, Ontario in April before a tour of Germany, Austria and Italy in October.