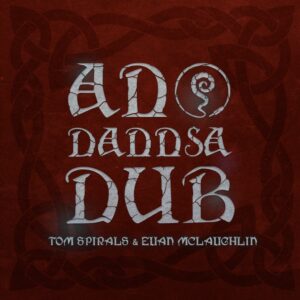 Future dub from ancient Scotland. This is the musical message set to be spread by new trad-dub collective, An Dannsa Dub, on the release of their debut, self-titled single. An Dannsa Dub (The Dub Dance in Scots Gaelic) fuses the mystic sounds and instruments of traditional Gaelic songs with the heavy, driving basslines of dub music.

Headed by dub producer, MC & Scottish Alternative Music Award ‘Best Live Act’ 2021 nominee Tom Spirals; and trad multi-instrumentalist Euan McLaughlin from 2021 Scots Trad Music Awards nominees Lapwyng, An Dannsa Dub proves trad and dub can blend with ease: after all, both genres lead you to consider the spiritual, the magical, and the unexpected.

Stunning Scottish locations, from Crawick Multiverse (sister to Jupiter Artland and The Garden of Cosmic Speculation) to a remote bothy on the Southern Upland Way hiking trail, set the scene for the single’s accompanying music video; providing the eerie tale of how the An Dannsa Dub musicians came to acquire these futuristic songs.

An Dannsa Dub was created with the support of Help Musician’s Do It Differently Fund, one of only a few projects to receive support out of
thousands of applications across the UK.

“Sounds like the best ceilidh you’ll ever go to in your life, but on steroids” –
Phoebe Inglis-Holmes, BBC Music Introducing

An Dannsa Dub, the lead single and title track from the upcoming record releasing on November 5th. The record was self recorded from their respective homes and features vocals from acclaimed Gaelic Singer Ellen MacDonald, Bodhran from Callum Convoy and a spoken story, narrated by Gillian MacDonald as well as Spirals and McLaughlin’s talents on Flute, Fiddle, Guitars, Bouzouki, Synths, Keys and more. The record will be available digitally and on 12″ and was mastered my Francesco Paone (Tiberias Towa).

An Dannsa Dub are availabe to perform as both a full live band featuring Nicky Kirk (Eabhal), Ben Parkinson (North Fire Sound), Maxi Roots and Dan Brown, and as a DJ set along with live Fiddle and Flute.