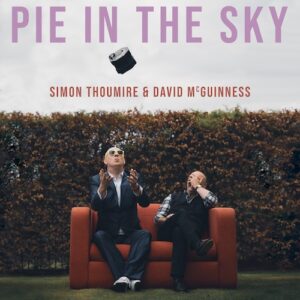 Ajastaika by Veera Kuisma
Fiddler and pianist Veera Kuisma plays with the Finnish trio ALDA, but for some reason we decided not to listen to their version of her tune before we recorded ours. Theirs is great too.

Concertina virtuoso Simon Thoumire and historical keyboard specialist David McGuinness have known each other for a very long time, but only rarely have had the chance to play music together. They started meeting up to play for fun, to lighten the long months of lockdown with no chance to play to an audience. Before long they’d built up an album’s worth of repertoire which includes work by forgotten Scottish women composers, tricky tunes by Finnish friends, a Victorian religious parlour song, a duo for baroque flutes by William McGibbon, and some banging reels by Robert Mackintosh.

Since winning the BBC Radio 2 Young Tradition award in 1989 Simon Thoumire has built a unique place for the English concertina in the world of Scottish traditional music and beyond. His music has encompassed folk, jazz, improvisation and his own compositions, and he is also a tireless advocate for traditional music with the organisation Hands Up For Trad and the Scots Trad Music Awards.

David McGuinness has been involved with historical Scottish music for the last 30 years with Concerto Caledonia, while also pursuing many other musical avenues and collaborations, playing as many obscure keyboard instruments as possible, and composing and producing for television and radio.