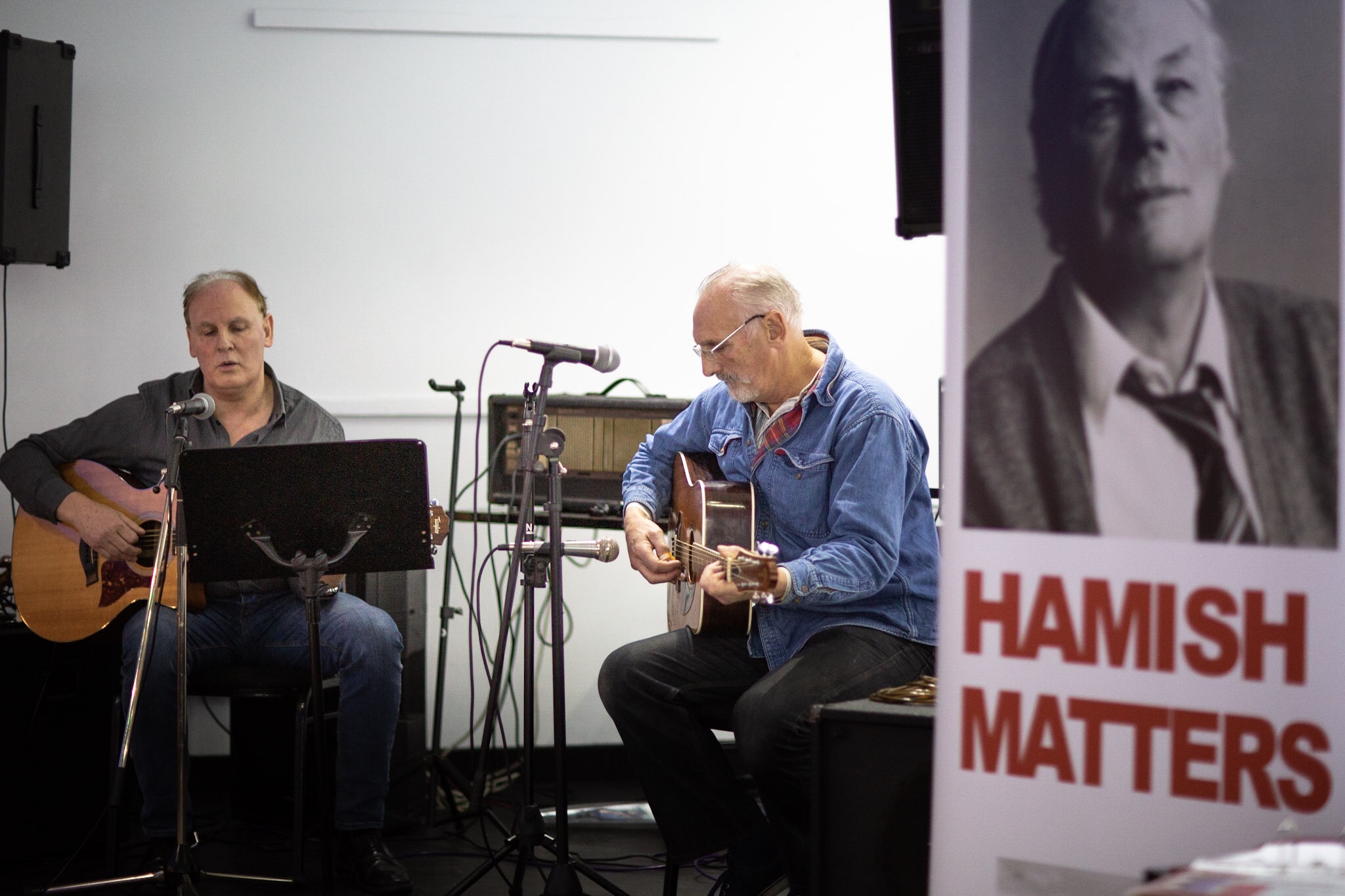 Hamish Matters – The Hamish Henderson Festival celebrates the centenary of the birth of Hamish Henderson, with events taking place in his hame toon from 1st – 11th November

Hamish Henderson was a Scottish poet, songwriter, soldier and intellectual who was born in Blairgowrie, on 11th November 1919. Through his work in the fields of folk song and poetry, he has been referred to as the founding father of Scotland’s 20th century folk renaissance.

In 2017, following upon the production of a documentary by film-maker Robbie Fraser about the life of Hamish Henderson, and spurred on by the enthusiasm and determination of a group of locals, the idea of a Hamish Henderson Festival was born – and in 2017 the first Hamish Matters Festival took place in Blairgowrie and Rattray.

As the Festival enters its third year, it is the most ambitious yet, and a very special celebration of the centenary of the birth of the man himself – an event recently acknowledged in a Motion brought before the Scottish Parliament by Joan McAlpine MSP, during which Hamish was spoken of with warmth and admiration by several members of the house.

A series of cultural events and activities will take place between 1st and 11th November across Blairgowrie and Rattray in community halls, schools and well kent venues, showcasing folk music, poetry, film, storytelling and Scots, Cant and Gaelic language – particularly fitting given that this 2019 is UNESCO’s international Year of Indigenous Languages.

And local master weaver Ashleigh Slater has joined the celebrations by producing a special celebratory Hamish Henderson (Commemorative) tartan, featuring graphite grey, silver and black colours to represent the penmanship and recordings of this remarkable man. Brown and golden hues represent Hamish who loved a tipple with green being a nod to the traditional Henderson tartans, and raspberry red to reflect the berry fields where Hamish recorded the Travellers, the renowned Belle Stewart and the song The Berry Fields o Blair. The tartan and its’ colours are interwoven throughout the programme for the Festival.

Perthshire poet Jim Mackintosh, who is one of the team who have organised this year’s Festival, said ‘The Centenary of the birth of Hamish Henderson provides an irresistible prompt for reflecting not only on why he mattered but why he matters to this day. First and foremost, Hamish was a Poet but arguably pushed his own creative intellect to one side to make room for the many causes he would champion over the years.

In addition, as with every true radical, Hamish looked beyond the orthodoxies of his times. Opinions and outlooks that once attracted mainstream hostility now permeate society at large – in no small part thanks to the moral courage of people such as Hamish. In the turbulent times we live, the world could do with a few more Hamish’s and in this his Centenary year, the Hamish Matters Festival will continue to provide space to celebrate Hamish and hope it provides people the opportunity to reflect on our shared humanity.’

Highlights of the full programme will include the launch of a Screen Memories Club, where excerpts from old movies featuring Hamish and Perthshire will be shown – the club will then become a regular event in Blairgowrie; Halflins, Hecklers, Weavers & Weemin, a performance built around the jute industry and featuring traditional Scottish singer Sheena Wellington, and an afternoon with biographer, writer and film producer Tim Neat, and poet and playwright George Gunn, both of whom were good friends of Hamish – not an event to be missed! There are events in Blairgowrie Library for children, including writer Thomas Clark introducing us to his hilarious Scots tongue version of Diary of a Wimpy Kid—Diary of a Wimpy Wean. On Saturday evening, the now traditional ceilidh – a modern staging of the People’s Ceilidh of 1951, will be held in Blairgowrie Town Hall, featuring amongst others Steve Byrne, award-winning Gaelic singer Mischa MacPherson, singer, actress, writer and broadcaster Dolina MacLennan, Sheena Wellington, folklorist, ethnologist, broadcaster and singer Margaret Bennett, and George Gunn.

And on Monday 11th November, 100 years to the day from the birth of Hamish, six local schools will join together in the Town Hall to share songs and poems written and collected by Hamish Henderson.

To find out more, please contact John Corrigan on JCorrigan@pkc.gov.uk or phone 0774862397. Or call into Blairgowrie Library – you can take a look at the bust of Hamish situated in the library while you are there. Tickets for events are available on Eventbrite and for some events, from Mitchells Newsagents, High Street, Blairgowrie, and Blairgowrie Library,

For more information on events & tickets go to our Facebook page – @HamishMatters.

And the oppression, the wall
and all else fades.

How fine the image of your raised fist will be!
Freedom (the bairns o Adam awaken)

After joining the Intelligence Corps during World War II, Hamish fought in both the North African Campaign and Italian Campaigns.  During this time he wrote one of the great books of World War II poetry, ‘Elegies For the Dead in Cyrenaica’, and also produced one of his famous songs, ‘D-Day Dodgers’.

After the War, Hamish – a renowned linguist, speaking six languages – became a peace activist, travelling Scotland collecting songs and stories from various traditions – Gaelic songs, the Borders, Aberdeenshire Bothy Ballads, and songs of the Travelling People including from our local area.   Hamish was appointed early on in its existence (1951) along with Calum MacLean (brother of Sorley) to the School of Scottish Studies in Edinburgh, and both as folklore collectors. Hao remained an overarching omnipresence and a key figure in its growth as a significant figure for decades and was and still is unrivalled in that sense. He continued to be active in politics, poetry and song writing, attaining a national and international reputation. Hamish died in Edinburgh in 2002, aged 82.

There is a bust of Hamish in Blairgowrie Library, and a street leading onto Blairgowrie Community Campus has been renamed Hamish Henderson Place in his honour.

Hamish Matters, the Hamish Henderson Festival is organised by volunteers, along with some part-time support from a paid administrator. Funding has been received from Perth & Kinross Rural Events Funding and the Common Good Fund, which helps outstanding non-profit organisations to make a greater impact in the communities they serve.