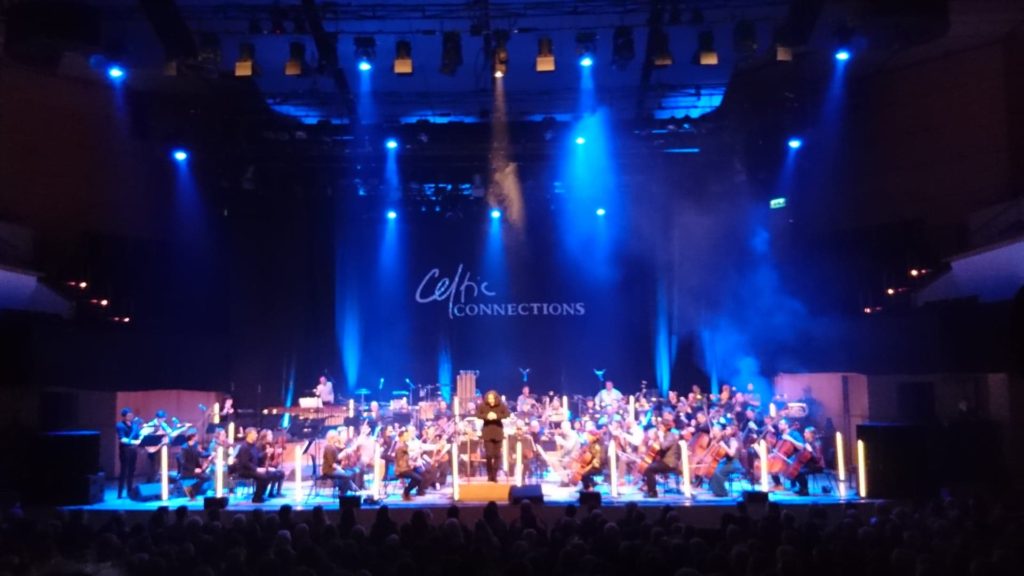 Greg Lawson and The GRIT orchestra were and are mesmerising! This years’ grand opening of Glasgow’s Celtic Connections festival was an explosion of sound, cultures, identity, tolerance, inclusivity, hope, and freedom in what Lawson described as a “diverse orchestral landscape” with a “kaleidoscopic landscape of sound”.

The positive themes, which drew their inspiration from the Declaration of Arbroath – a 700 year old legal document dated 1305, in which Scotland was confirmed as an independent sovereign state – were weaved into the fabric of the evening, creating a wall of sound that grabbed you at kick-off, then let you go at the end.

Lawson defined the Arts as “stories of the people” and that was beautifully illustrated by “The Declaration” – a suite of six pieces, commissioned by some of Scotland’s well known musicians – Rudi de Groot, Patsy Reid, Donald Shaw, Christ Stout and Catriona MacKay, Fraser Fifield, and Paul Towndrow. Each composer was given the brief to use the music to convey what identity meant to them.

Each piece used stimulating musical ingredients, from recognisable rich sweeping stings playing soaring melodic lines, to sections of stabbing syncopation; dissonant horns and absorbing whistle ostinatos were juxtaposed with hopeful major chords; Spoken word was contrasted with smooth sexy saxophone, and all of that grew into a chaotic screaming climax. Feelings of hope, freedom and tolerance were flowing freely through the sounds. Everything within the performance and the writing of the pieces was there to grab your attention and it was immense!

The GRIT orchestra performed some of Martyn Bennet’s music in the second half which was fabulous to hear again. Its kind of timeless. Lawson explained the themes of inclusivity, multiculturalism and tolerance that run through Bennet’s music is what the GRIT Orchestra was built upon.

Perhaps what was most refreshing, was the encouragement the audience were given to respond to the music in which ever way felt comfortable – make noise, clap, dance, sing – a welcome shift from the relatively recent culture of absolute silence at a musical performance until the performance has ceased. An invitation of inclusivity. Lawson’s engagement with the audience and the audience’s responses to the music all added to the texture, atmosphere and warmth of this special evening.

Hello! Ciamar a tha sibh? Welcome to our latest podcast featuring a host of brand new releases from … END_OF_DOCUMENT_TOKEN_TO_BE_REPLACED

Hello! Ciamar a tha sibh? Welcome to our latest podcast featuring a host of brand new releases from … END_OF_DOCUMENT_TOKEN_TO_BE_REPLACED