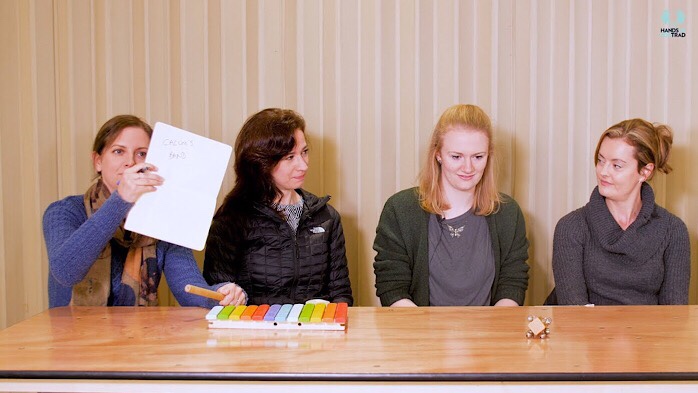 Watch the latest Hands Up for Trad Quiz featuring our Trad Awards nominated teams Paul McKenna Band vs Kinnaris, Heisk and Maeve Mackinnon. Can you answer all the questions? Vote now in the MG ALBA Scots Trad Music Awards at http://www.scotstradmusicawards.com. Please Share!

The answers are below!

What winter music festival launched its programme last Thursday? (Celtic Connections)
Which Perthshire musician and instrumentalist of the year nominee recently released a CD called A Glint O’ Scottish Fiddle (Patsy Reid)
Bonus – who played piano on the album? (Alasdair Iain Paterson)
Who won the BBC Radio Scotland Young Traditional Musician Award in 2008? (Ewan Robertson. Look out for Breabach’s new album – Frenzy of the Meeting)
What island is Lau fiddler Aidan O’Rourke from? (Seil Island)
Bonus – which fiddler / flute player did Aidan play in a duo with in the 1990s? (Claire Mann)
The MG ALBA Scots Trad Music Awards is in Perth Concert Hall on 1st December. When was it last held in Perth? (2011) (buy tickets at www.scotstradmusicawards.com)
Name the title of Talisk’s brand new album? (Beyond)
Bonus – what was the name of their last album? (Abyss)

The End Game
Which Netflix film about Robert The Bruce did Jim Sutherland just compose for? (Outlaw King)
Which Gaelic Singer recently won the men’s Gold Medal at the Mod? (Ruairidh Cormack)
Which female Glasgow singer who was first introduced to traditional music by Norman Buchan’s ‘Ballads Club’ in Rutherglen inspired and taught the students at the RSAMD for many years? (Anne Neilson)
Munros are mountains above 3000ft. What is name given to smaller mountains over 2500ft (Corbetts)
What is the name of Louise Hunters Fiddle group? (Southside Fiddlers)
What Glasgow songwriter wrote Cod Live Oil (Hamish Imlach?)

Remember and buy your tickets for the MG ALBA Scots Trad Music Awards on the 1st December in Perth Concert Hall. It will be a brilliant night featuring lots of music and awards. www.scotstradmusicawards.com

Hi there, I am back with the last podcast of the year. Rather than looking backwards let's look … END_OF_DOCUMENT_TOKEN_TO_BE_REPLACED

Hi there, I am back with the last podcast of the year. Rather than looking backwards let's look … END_OF_DOCUMENT_TOKEN_TO_BE_REPLACED