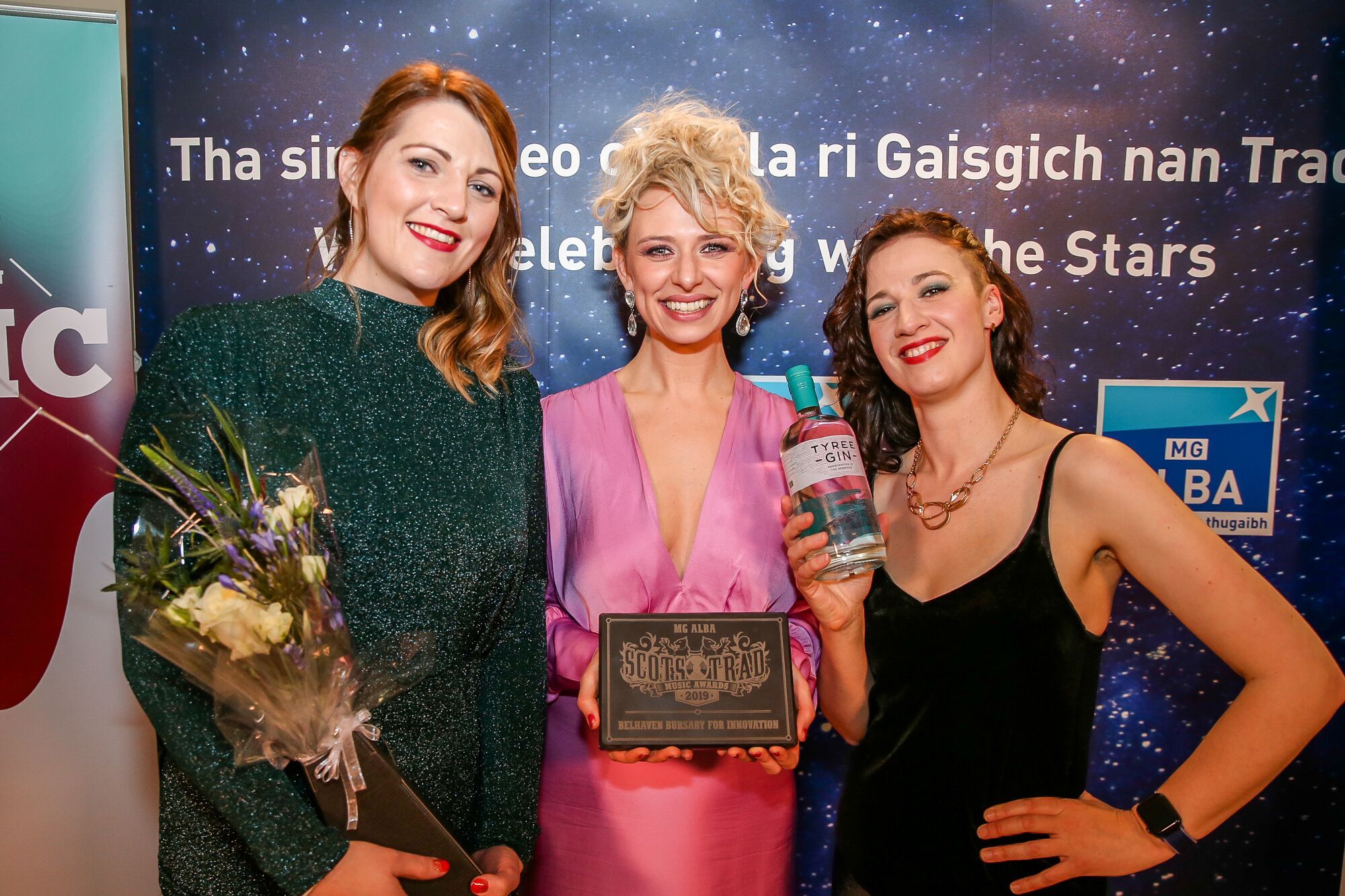 The biggest award, The Belhaven Bursary for Innovation in Scottish Music in association with Showcase Scotland Expo supports the winner to progress unique ideas and empower creation. Financially matched only by the Mercury Prize, the prestigious fund of £25,000 was awarded to Kinnaris Quintet, making them the first all-female band to win the prize.

Breabach were presented with the Album of the Year Award for their sixth album, Frenzy of the Meeting.

Presenter on the night Mary Ann Kennedy scooped up Gaelic Singer of the Year sponsored by The Highland Society of London.

Adding to her list of Trad Award accolades Jenna Reid won Composer of the Year battling against an all-female shortlist. Jenna’s group Blazin’ Fiddles were also awarded Folk Band of the Year. In 2005 Jenna won best up and coming artist and two years later she was nominated for best instrumentalist.

Following ten consecutive sell outs, Tiree Music Festival picked up the award for Event of the Year. The popular and deserving winner has contributed £6.4 million to the small island economy.

Dubbed by Rolling Stone as ‘forward-thinking folk music’ Man of the Minch took home The Up and Coming Artist of The Year award, which recognises fresh and promising talent.

After a whirlwind year of wowing crowds at Belladrum and preparing to kick off 2020 with sold-out shows across the UK, trio PEAT & DIESEL picked up the award for Live Act of the Year.

The sought-after Citty Finlayson Scots Singer of the Year sponsored by Traditional Music and Song Association went to Steve Byrne.

Event founder and promoter, Simon Thoumire, said: “It has been another fabulous year at the MG ALBA Scots Trad Music Awards. Another great set of winners which include all the new Scots Trad Music Industry Award winners as well! Our scene is in good shape!”

Communications Manager for MG ALBA, Murdo MacSween, said: “It’s been another wonderful year for Scottish traditional music, and we’re delighted that MG ALBA was yet again at the heart of this celebration of our world-class talent. BBC ALBA is an amazing platform for the fantastic acts recognised tonight and we look forward to continuing to showcase them on our screens in the years to come.”

Alan Morrison, Head of Music, Creative Scotland said: “Yet again Na Trads prove that Scotland has an age-old music which lives and breathes in the 21st century. This year’s winners include grassroots heroes and international stars, acts who have blazed a trail for decades and others who are just starting out on a promising career. Congratulations to them all – and to every one of the nominees who make our music the envy of the world.

Congratulations too to Iain Ruari Finlayson, winner of the Youth Music Initiative’s Music Tutor of the Year award, whose work with Skye Youth Pipe Band takes Scotland’s most distinctive instrument to the next generation of players.”

Gordon Muir, Marketing Controller at Belhaven Brewery said: “We are thrilled to award this year’s Belhaven Bursary for Innovation in Scottish Music to Kinnaris Quintet.  Their musical range, innovative arrangements and vibrant stage presence stood out among an amazingly talented shortlist. Since coming together in 2017, Kinnaris Quintet have brought a fresh energy to the trad scene and we look forward to the Bursary helping them spring to the next level.

It has been inspiring once again to see the depth and breadth of innovation in the Scottish folk music scene, with an array of brilliant artists weaving in inspiration from all sorts of genres and cultures to create exciting new sounds.

Belhaven Brewery are proud of our links with this wonderful scene with which we see so much in common – inspired by our traditions and roots, which we use to spur our imagination to create new beers and new music that bring people together for great times.  We are very excited about working with Kinnaris Quintet in 2020 and can’t wait to see where the journey takes us.”

Stuart Fleming, PRS for Music Senior Membership Manager, Scotland & Northern Ireland, said: “Congratulations to all of the nominees and worthy winners. It’s great to see such diverse talent recognised at the MG ALBA Scots Trad Music Awards which continue to showcase the incredible writing and creative talent within the Scottish traditional music community. PRS for Music is proud to once again support the Composer of the Year Award – especially this year with all the nominees being exciting female composers.”

The evening also included a number of exclusive recognitions including The Hamish Henderson Services to Traditional Music Award Sponsored by Edinburgh Folk Club where Dr. Peter Cooke was praised.

The Services to Gaelic Award, Sponsored by Bòrd na Gàidhlig, was presented to Anne Soutar.

The Janet Paisley Services to Scots Language Sponsored by Scots Radio was presented to Sheena Blackhall, well known for her poetry.

The evening continued through to the early hours with Ceilidh Minogue and The House of Song led by Doris Rougvie.

The evening was broadcast live on BBC ALBA and is repeated Sunday 8th December at 8.55pm with unseen footage shown on a special highlights show on 27th December at 9pm.

Frenzy of the Meeting by Breabach

Club of the Year sponsored by Traditional Arts and Culture Scotland

Community Project of the Year sponsored by SKIPINNISH

Scottish Folk Band of the Year sponsored by Threads of Sound

Trad Video of the Year Sponsored by Ceòlas Uibhist

Man of the Minch

Venue of the Year Award sponsored by Musicians’ Union