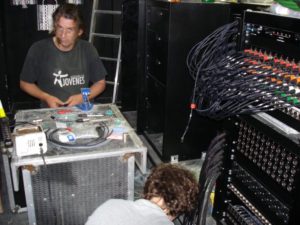 Congratulations to Alan “Dinner” Mackinnon who has been nominated in Live Sound Engineer of the Year in the MG ALBA Scots Trad Music Industry Awards 2019. Vote now! Vote now!

Tell us about yourself
I have worked as a freelance Live Sound engineer for many years in and around the Highlands as well as in Europe and North America. Currently I am the live engineer for Julie Fowlis, Duncan Chisholm, Wolfstone and over the years many other highland and Scottish bands.

Why are you involved in Scottish music?
Since I went to Knebworth to see Led Zeppelin in August 1979 I became involved with bands around Scotland and was constantly irritated by poor sound quality. I decided to sort it out and am still working on that. My father didn’t think I had a real job until I did sound for The Alexander Brothers at the British Legion in Inverness. Although I have worked with a wide variety of music, my heart lies with my Hebridean roots and make sure that the musicians I work with are heard in the most honest and sensitive way possible, no matter what the environment may be.

What are your plans for the future?
Soundcheck at 4 oclock ,don’t be late and then everyone will have a very nice time.