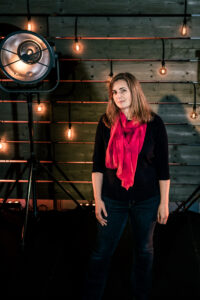 Congratulations to Rachel Walker who have been nominated in Album of the Year sponsored by Birnam CD in the MG ALBA Scots Trad Music Awards 2021. Vote here! Vote now!

Tell us about yourself
Rachel Walker is a singer, songwriter, arranger and educator based in the heart of Lochaber in Scotland’s beautiful West Highlands. At home with both Gaelic and English, she encountered the Gaelic tradition at a young age, after her family moved from Lincolnshire in England to the small village of Kinlochewe in Wester Ross. It was her school-teacher there, Meg MacLean, who encouraged Rachel to take her first steps on stage, engaging in Gaeldom’s unique system of artist development – competing at local Mòds and performing at at local cèilidhs. A regular participant at Fèis Rois, she soon fell in love with the songs, language and culture of the Gael.

Flying the nest for the bright lights of Edinburgh, Rachel diversified, studying classical music at Napier University. Following graduation and accepted onto the first year of the BA Scottish Music course at the Royal Conservatoire of Scotland, she was tutored by the highly respected Gaelic singer and tradition bearer, Dr. Kenna Campbell OBE.

Collaboration has been at the heart of Rachel’s musical journey, as a member of Scottish-Irish quartet Cruinn and West Coast super-group Skipinnish. She has also worked with the Tiree-born poet Flora MacPhàil, with whom she co-penned the beautiful ballad ‘An Smeòrach’ (’The Mavis’).

Rachel’s collaborative work continues into 2021, with the release of new album ‘Gaol’ (‘Love’), the first from her own Ròs Dearg Records. The LP showcases songs new and and traditional in Gaelic and English and includes ‘Caisteal Ghaoilein’ (‘Gylen Castle’) a new collaboration with Flora, a re-working of Cruinn Classic ‘Gun Dòchas’ (‘Hopeless’) and two songs co-written with poet, Marcas Mac an Tuairneir. The album opener ‘Là Luain’ (‘The Day that Never Comes’) is a heart-wrenching ballad on which she is joined by fellow Mòd Gold Medallist James Graham. The album also features guest appearances from well known traditional musicians including award winning accompanist and singer Aaron Jones.

Recorded at St. Mary’s Space, Appin, and co-produced by Jamie Smith, the new album see Rachel showcasing her unique skill and creativity, something which won her accolades at The Trads, as Gaelic Singer of the Year in 2013 and subsequently nominated for Composer of the Year in 2015.

As a composer, Rachel has been commissioned by organisations such as Scotland Sings, Fèisean nan Gàidheal and SNH and her work has been showcased at festivals such as the Royal National Mòd and Celtic Connections. Her song-writing has also earned critical acclaim, with her ‘Fada Bhuam’ chosen to represent Scotland at the Liet International Song Contest and her single, ‘Arms of the Ocean’ featuring lead singer of Skerryvore, Alec Dalglish, reaching number one in the World Music Download Chart.

Rachel is the conductor for Lochaber District Gaelic Choir, and has guided them to victory in the Margrat Duncan competition for district choirs three years running at the Royal National Mòd. She also won the An Comunn Gàidhealach Gold Medal for solo Gaelic singing in 2017.

Rachel works as a lecturer of music at West Highland College UHI, where she is the course leader of the music department. She is also the Gaelic song tutor at the National Centre of Excellence in Traditional Music in Plockton.

Why are you involved in Scottish music?
There are no other songs that evoke such emotion and feeling as those in the Scottish Gaelic tradition.

Any particular career highlights?
Performing for Celtic Connections as an online festival was a career highlight. An amazing venue, a group of fantastic musicians, and a chance to showcase some of the music from Rachel's album 'Gaol', which was recorded and released in the midst of the Covid crisis was a real honour.

What are your plans for the future?
Rachel is looking forward to being able to write more music and songs and very much hopes to be able to get back to performing and collaborating with new people after a period of ill health.