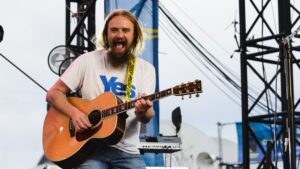 Tell us about yourself
I am extremely humbled by this nomination, and very grateful to be recognised in such highly esteemed company.

I would describe myself as a freelance accompanist and tutor, originally from Strathkanaird (just north of Ullapool) via Terre-Haute, Indiana.

I have been living in Glasgow for the last twenty years, and while specialising in traditional Scottish music I have been lucky enough to perform and educate across many genres – from numerous collaborations with Bhangra producers ‘Tigerstyle’, performing with ‘The Edinburgh Quartet’, recording with rappers to currently playing with Paisley born blues singer and writer/publisher Linda Jackson.

Growing up I was lucky to benefit tremendously from some incredible teachers – Alex Siezcarek imparted to me incredible wisdom and the Suzuki method on classical violin, and although I quit the orchestral world in my early teens to pursue my Nirvana fetish, I learned so much about musicianship and discipline from that environment.

I then embarked on a period of self tuition on the guitar (there were no guitar tutors in easy reach of Ullapool) save for two weeks of the year when I would attend the now legendary Fèis Rois, where I was lucky enough to be inspired by many wonderful tutors – particularly Terry Small, Jim Hunter, Ishbel MacAskill and Gillian Mackenzie. I also must give huge credit to Valerie Bryan, well known as Ullapool High School Music teacher; editor of ‘Ceòl nam Fèis 1 &2’ and lead tutor (in conjunction with Andy Thorburn) of Fèisean nan Gàidheal tutor training for 15 years.

In my early twenties I was asked to cover some classes by Jessie Newton for ‘Fèis Dhun Eideann’, and I quickly discovered that seeing young people enjoying learning music was extremely rewarding.

Engaging young people in traditional Scottish music and fusing it with other genres has become an almost all-encompassing passion of mine and I have worked for numerous organisations covering multiple genres of musical education in this field. I am a passionate advocate of the immeasurable and infinite benefits of learning music to the human experience.

My classical training, background in orchestral performance and choral singing as well as my practical experience gained over the last two decades has allowed me to develop skills necessary to engage with musicians from widely varying backgrounds.

It brings me a tremendous joy when I see ex-pupils of mine touring the world, winning awards and carving highly successful careers within the ever expanding world of Scottish traditional music.

Just as importantly I take immense pride when I see pupils of mine who might be struggling in mainstream education or have learning difficulties gaining in confidence and self esteem from the immeasurably rewarding experience of learning to play music.

I believe unequivocally that every child in Scotland must have access to high quality and continuous musical education and that it falls upon our wider community of educators to ensure that our elected representatives make certain that this is the case.

Why are you involved in Scottish music?
As an incomer to this rich, diverse and vibrant nation; my adopted homeland has welcomed me warmly and given me a tremendously varied and colourful human experience. As a bit of a weirdo at school, I felt truly at home for the first time in my life as a teenager attending Fèis Rois. Hearing and seeing Martyn Bennet, Shooglenifty and the Peatbog Faeries as an ‘I’ve got a few beers and some mates with a camper van’ highly excited teenager was nothing short of an epiphany! And I think I’ve probably covered ‘Why are you involved in Scottish music?’ in my excessively verbose ramblings above…

Working with The National Centre of Excellence in Traditional Music in Plockton and the four National schools of musical excellence on orchestral score and performance of ‘Contours of Cairngorm’ with Patsy Reid, Mhairi Hall and Fraser Stone

Winning a ‘Danny Kyle’ award and playing at Simon Thoumire and Clare Mclaughlin’s wedding with ‘Fire in the Bog’ (John Somerville, Adam Sutherland and I)

Recording the album ‘Cairngorm’ at ‘Crear’ with Mhairi Hall, Fraser Stone, Donal Lunny and Will Lamb

What are your plans for the future?
All my regular teaching jobs are still being conducted by ‘Zoom’, and as such I am very much looking forward to getting back face to face with all my regular pupils.

I’m always happy to take on more pupils if time allows and can be contacted through my website ‘michaelbryan.biz‘.

Teaching wise, I would like to do some more mixed genre large group stuff. I’m also keen to engage with refugees and asylum seekers.

Playing wise – I just want to do more! I don’t have a lot going on just now in that area of my professional life and am very much open to offers.

Plans are in the pipeline to record a duo album with renowned Shetland fiddler Andrew Gifford.

Also – having been an accompanist for many fabulous musicians over the years, it’s high time I did some of my own stuff. See ‘michaelbryan.biz‘ for developments….watch this space!