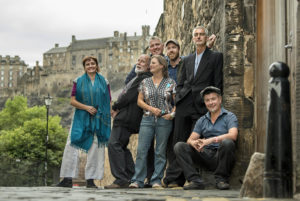 Congratulations to Shooglenifty and Tanxugueiras who have been nominated in Trad Video of the Year in the MG ALBA Scots Trad Music Awards 2019. Vote here! Vote now!

We asked Jane-Ann Purdy of Shooglenifty and Tanxugueiras the following questions.

Tell us about yourself
Shooglenifty was formed in 1990 by musicians from the Scottish Highlands, Orkney and Edinburgh. Its bright spark was the idea of fusing traditional and traditional-sounding melodies with the beats and basslines of a mixed bag of more contemporary influences. As happy playing a small highland village hall as they are on an outdoor festival stage playing to tens of thousands, the Shoogles (as they’re known to their fans) have promoted Scottish music all over the world for nearly three decades.

Why are you involved in Scottish music?
It’s where we’re from and where we are.

Any particular career highlights?
First stage invasions at the Sydney Opera House and the Royal Lyceum Theatre, Edinburgh. Recording an album at the Mehrangarh Fort, home of the Maharaja of Marwar-Jodhpur with the princely Dhun Dhora. The incredible hospitality in Galicia in August 2017 when we recorded East West and shot this video. Still being here after nearly 30 years!

What are your plans for the future?
An incredible 30th anniversary year of very special gigs and a brand new album featuring the tunes and playing of our newest, the effervescent Eilidh Shaw.