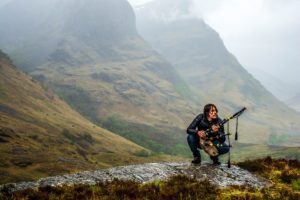 Congratulations to Ross Ainslie who have been nominated in Belhaven Bursary for Innovation, Trad Video of the Year in the MG ALBA Scots Trad Music Awards 2019. Vote here! Vote now!

Any particular career highlights?
BBC Radio 2 festival in a day in Hyde Park with Treacherous Orchestra.
Playing with Zakir Hussain at the London Olympics.

What are your plans for the future?
Releasing my 4th album Vana next year!