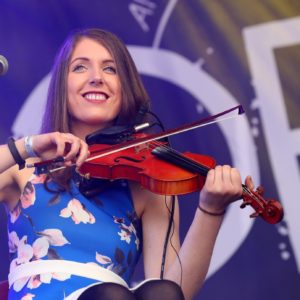 Congratulations to Hayley Keenan who have been nominated in Composer of the Year sponsored by PRS for Music in the MG ALBA Scots Trad Music Awards 2019. Vote here! Vote now!

Tell us about yourself
Hayley began playing the piano at the age of eight and the fiddle at the age of eleven after being influenced by her grandfather’s love of playing Scottish music.

In 2008, Hayley was awarded a place at the Junior Academy of Music at the Royal Conservatoire of Scotland (Previously RSAMD) in Glasgow, which she attended for three years, before moving to Plockton to complete her sixth year at The National Centre of Excellence in Traditional Music under the tuition of Andy Thorburn and Iain MacFarlane. In 2012 she started as a full time student at the Royal Conservatoire of Scotland, managing to graduate with a First Class Honours degree.

In 2014 Hayley co-founded Talisk which went onto great success. In 2015 they won a BBC Radio 2 Folk Award. This then went on to their album being nominated Album of the Year at the 2016 MG Alba Trad Awards. In 2017 they went back to the Folk Awards with a nomination for the Horizon Awards and and then went onto being crowned “Folk Band Of The Year” at the MG Alba Scot Trad Music Awards. In 2018, the band were awarded the Belhaven Bursary for Innovation, which recognises Scottish folk and traditional artists innovating and distinguishing themselves in their field.

The release of their hotly anticipated second album, Beyond, in October 2018 was met with a five-star ‘Top of the World’ review in Songlines, praising the band as “incredibly infectious and endearing… fresh, invigorating, accomplished and playfully frisky.”

Why are you involved in Scottish music?
I love listening, creating and performing Scottish Music. It is amazing to get the opportunity to perform and share the music I love, all over the world!

Any particular career highlights?
A career highlight of mine would be playing Stage 1 at Cambridge Folk Festival with Talisk, earlier this year. It was a total dream gig and I still get a buzz thinking about it. The festival is so well run and the atmosphere is always amazing!

What are your plans for the future?
I plan to still be touring with Talisk, releasing new music and exploring more of my own creative projects. I set up a folk club called 'Largs Folk Nights' two years ago, and am in the process of developing this into something bigger, which I'm really excited about!