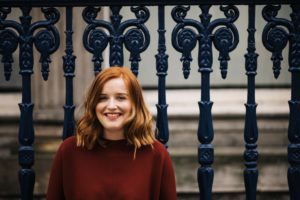 Congratulations to Ceitlin Lilidh who have been nominated in Gaelic singer of the Year sponsored by The Highland Society of London in the MG ALBA Scots Trad Music Awards 2019. Vote here! Vote now!

Tell us about yourself
Ceitlin Lilidh is a Scottish Gaelic singer brought up in Ness on the Isle of Lewis. She is a member of Sian and features on Niteworks’ notable single Air Fàir an Là. Her vocals also star on Netflix’s Outlaw King, and Skipinnish’s album The Seventh Wave. As a graduate of the Royal Conservatoire of Scotland, winner of the Mòd Traditional Gold Medal and with a Danny Kyle award under her belt, Ceitlin has a wealth of experience performing all over the world as an ambassador for Gaelic song.

Why are you involved in Scottish music?
I was surrounded by all kinds of music growing up, but I fell in love with Gaelic singing after attending lessons in Taigh Dhonnchaidh as a little girl. This inspired me to pursue a career in singing, and I was fortunate enough to get into the Royal Conservatoire of Scotland where I met lots of amazing, and inspiring musicians whom I am very grateful to work with to this day.

Any particular career highlights?
A stand out moment is performing with Sian at Niteworks’ sold-out Barrowlands show at the beginning of the year. I was also honoured to be asked to perform Runrig’s An Ubhal As Àirde with the Glasgow Cathedral Choir for BBC Scotland’s World War One Remembered feature.

What are your plans for the future?
Sian are currently in the process of making an album, and I am very excited for you all to hear it!