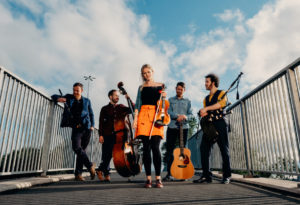 Congratulations to Breabach who have been nominated in Album of the Year sponsored by Birnam CD, Belhaven Bursary for Innovation in the MG ALBA Scots Trad Music Awards 2019. Vote here! Vote now!

We asked James Lindsay of Breabach the following questions.

Tell us about yourself
Frenzy of the Meeting is the latest release from multi award-winning Scottish contemporary folk band Breabach. Building on the ideas and experimentation from their 2016 album Astar, this new work is explorative and creative. Produced in collaboration with Eamon Doorley (Julie Fowlis, Danú) and engineered by Iain Hutchison sees the band take exciting steps towards developing a more expansive sonic landscape.

Alongside traditional songs, contemporary tunes and original compositions from each band member with the material largely themed on todays frenzied experience of global politics, media and the natural world as well as focusing on the positive fevered hive of innovation, creativity and pioneering music within the Glasgow music scene, to where the band belong.

The album comes after two years of hectic global touring post release of Astar. In that time the band picked up ‘Best Folk Band’ and ‘Best Album’ at the MG ALBA Scots Trad Music Awards as well as nominations for ‘Best Group’ at the BBC Radio 2 Folk Awards and ‘European Album of the Year’ in the Songlines Music Awards.

Breabach unite the talents of Megan Henderson (Fiddle, Vocals), James Lindsay (Double Bass, Vocals), Calum MacCrimmon (Bagpipes, Whistle, Bouzouki, Vocals), James Duncan Mackenzie (Bagpipes, Flute, Whistle) and Ewan Robertson (Guitar, Vocals, Cajon). Acknowledging and respecting the origins of both the music they play and the roots of the band whilst embracing the future with new ideas, energy and belief is a key attribute of the band and another theme that is strongly conveyed through this new release.

Why are you involved in Scottish music?
We feel very passionate about our musical and cultural heritage and feel proud to be ambassadors for it. It is a real privilege to get to travel with our music and to be recognised in these awards.

Any particular career highlights?
A few notable highlights include performing at the Sydney Opera House, Central Park New York, The Glasgow Commonwealth Games in 2014 and the Ulsan Christmas Festival in South Korea.

What are your plans for the future?
Through the end of 2019 and into 2020 we will continue to tour extensively and start working on new music. In December we head out to Austria for a 3 week tour before getting set for our own show at Celtic Connections on 17th January, a trip to Australia for Burn's Night and a tour of the UK in February.