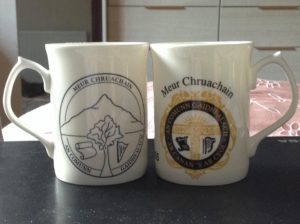 Congratulations to The Taynuilt Cèilidhs who have been nominated in Community Project of the Year sponsored by Gordon Duncan Memorial Trust in the MG ALBA Scots Trad Music Awards 2018. Vote now!

We asked Moira Dunlop of The Taynuilt Cèilidhs the following questions.

Tell us about yourself
Meur Chruachain, the Cruachan Branch of An Comunn Gàidhealach, (the organisers of the Royal National Mòd,) was formed on the 19th of March 1930. So began the 88 year tradition of 'The Taynuilt Ceilidhs' which promote and support the Gaelic language and culture. These ceilidhs are still organised and run by a small volunteer committee, helped by local folks who donate raffle prizes and scrumptious home baking and also, aided by members of the village Gaelic choir who take turns at the door and washing up after the half-time tea. We run six monthly winter ceilidhs and seven or eight weekly summer ceilidhs, charging £4 for adults and £2 for children over the age of 5. The monies we take in are then given out in donations to support fifteen local music and culture groups eg the school pipe band and Trad music department, local choirs, Fèis Latharna, the Highlands and Islands Music & Dance festival, the local Mòd and we choose a local charity to support each year. We have also given money to help fund one-off workshops, pay for new choral arrangements and have facilitated concerts by established artistes, the Blas festival, the MacIntyre Clan Gathering and most recently the 2018 finalists of the BBC Young Traditional Music competition.

In the winter we invite artistes from other parts of the country, as well as involving local musicians, dancers and Gaelic singers. This gives local people the opportunity to hear and get to know musicians and singers from outwith our own area. In the summer, the weekly programmes are mostly made up of local musicians, providing the opportunity for the young -and the not-so-young- to debut their talents and with a wider range of Scottish, classical, modern music etc aimed at including those who may be visiting the area. We try to incorporate all age groups in our performers – we hope everyone will listen and learn from, but most of all, appreciate each other in a warm and encouraging atmosphere. We are a family-friendly ceilidh, set in a village hall, with a warm welcome for all.

Why are you involved in Scottish music?
Gaelic and Scottish music and culture is still a central part of life here in Argyll. It’s music we grew up with and our ceilidh gives an outlet and and an opportunity to showcase and encourage the sharing of that culture with all age groups.

Any particular career highlights?
When anyone performs at a ceilidh, they are adopted as “one of our own” so we take great pride- and part of the credit (!!!) – when singers / choirs win medals at the National Mod, musicians gain places at conservatoires, see performers gaining in confidence and ‘giving back’ by bringing pleasure with their music in the community, even teaching others their particular skill. Donald Shaw and Karen Matheson of Capercaillie are just some of the young local musicians who have started on the Taynuilt stage!

What are your plans for the future?
As long as there are people willing to support the ceilidhs by giving their time, their talents – and by coming along as an appreciative audience, then we will still be here trying to bring the best, and the best out of, those who come along.