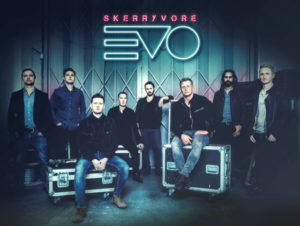 Congratulations to SKERRYVORE who have been nominated in Album of the Year sponsored by Birnam CD in the MG ALBA Scots Trad Music Awards 2018. Vote now!

We asked Daniel Gillespie of SKERRYVORE the following questions.

Tell us about yourself
Twice winners of Live Act of the Year, Skerryvore have taken their trad-rock fusion to 30+ countries worldwide.

Why are you involved in Scottish music?
It has given us an amazing career that has taken us all over the world so we are committed to continuing that journey and promoting Scottish music to new people and places worldwide.

Any particular career highlights?
In terms of shows, performing at the Shanghai Expo to 100,000+ and New York Central Park were two memorable locations however in terms of atmosphere our ‘home-coming’ gigs at Oban Live and Tiree Music Festival are always very special.

What are your plans for the future?
We have our first tour of Australia in March 2019 – a country we have been desperate to visit for a long time. Our progress in North America continues with 5 tours there next year but at home in Scotland we are excited about the 10th Tiree Music Festival in July 2019