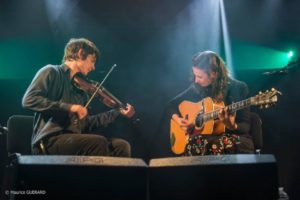 Congratulations to Ryan Young and Jenn Butterworth who have been nominated in Folk band of the Year sponsored by Threads of Sound in the MG ALBA Scots Trad Music Awards 2018. Vote now!

We asked Ryan Young of Ryan Young and Jenn Butterworth the following questions.

Tell us about yourself
Ryan Young and Jenn Butterworth can often been seen playing together as a fiddle and guitar duo. They first played together when Ryan was in his final year of the MMus at the RCS. Jenn coordinates a ‘recital festival’ of all the end of year recitals. After hearing that Ryan was having to play unaccaompanied she offered to play with him. They have been playing extensively throughout the UK and Europe since.

Why are you involved in Scottish music?
We’ve both loved traditional music since we were very young and I don’t think either of us could imagine doing anything else!

Any particular career highlights?
We have many highlights individually, but together we played infront of some huge audiences this summer. Two in particular that stand out were Sidmouth and Traversees de Tatihou. We get lost in the music and it’s a huge buzz when you remember at the end of a set that there’s about 900 people watching you.

What are your plans for the future?
We’re looking to play more and more and thinking about a possible live album too