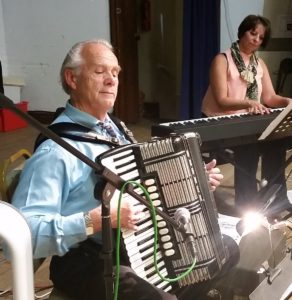 Congratulations to Iain MacPhail Scottish Dance Band who have been nominated in Dance band of the Year sponsored by National Association of Accordion and Fiddle Clubs in the MG ALBA Scots Trad Music Awards 2018. Vote now!

Tell us about yourself
Iain MacPhail and his band have been at the forefront of Scottish Dance Music for more than a generation. One of Scotland’s most experienced and talented band-leaders, Iain has a distinctively lively musical style of playing Scottish music and is one of the great innovators with his creative approach to the orchestration and syncopation of traditional music.

Why are you involved in Scottish music?
The Band’s individual skills have blended to provide an exciting and innovative approach to traditional music, instantly recognizable for their distinctive harmonies. The Band members all share the greatest respect and admiration for one another and have performed music in many forums, from Highland Games in Rio de Janeiro to royal occasions at Balmoral Castle with dances and balls throughout the UK, radio, television, theatre, cabaret and ceilidhs in between, as well as undertaking numerous visits to Europe, Canada, Africa, Japan and South America.
Iain values the loyalty of long-term associations with his band members, which helps the sound thrive. His band has sustained remarkably few changes of personnel over the years, and the quality of band members combined with Iain’s distinctive, lively musical arrangements ensures that the band performance seldom varies for the listener.

Any particular career highlights?
Always keen to promote the cause of Scottish music, Iain is as happy to play for a school hop as for the Queen at Balmoral. Iain has always loved music composition and arrangement and now has some 350 compositions to his credit. Many of these can be found in the music folders of nearly every Scottish Dance band and he has probably made one of the largest and most popular contributions to the Scottish Dance Music repertoire. He composes, he says, very much with the dancer in mind: “I feel that music and dance, as creative cultures, are expressions of joy to be savoured, and if the band and dancers have a rapport it makes for enormous fun, dynamism and enjoyment for all.”

What are your plans for the future?
Iain loves the challenge of researching and playing original music for country dances, putting meticulous preparation into every performance. He and the Band hope to have many more years of performing, composing and offering encouragement to all who share a love of traditional music as it continues to evolve.