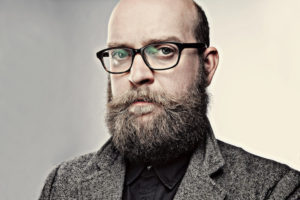 Congratulations to Findlay Napier who have been nominated in Live Act of the Year sponsored by Greentrax Recordings in the MG ALBA Scots Trad Music Awards 2018. Vote now!

Other covers include a terrifically gallus (Scots for ‘bold, mischievous, cheeky’ – ie quintessentially Glaswegian) version of Hamish Imlach’s ‘Cod Liver Oil and the Orange Juice’; a dreamily ardent rendering of The Blue Nile’s ‘A Walk Across the Rooftops’, and a gorgeous new ballad, ‘Marchtown’, by ex-Delgado Emma Pollock.

Napier’s fast-growing stature as one of the UK’s most distinctively gifted contemporary folk artists builds on his previous band work with Back of the Moon and The Bar Room Mountaineers, also reflecting his long-time immersion in the vibrant stylistic melting-pot of Glasgow’s world-famous music scene. As promoter of the decade-old Hazy Recollections concert series and founder of the Glasgow Songwriting Festival, he’s been particularly influential in fostering cross-fertilisation between the city’s folk and indie communities.

Spring 2018 saw him touring with acclaimed contemporary protest-song showcase Shake the Chains, whose September album release is followed by more dates early next year.
While the sorrow and anger simmering through Glasgow track ‘There’s More to Building Ships’ (originally written for Shake the Chains) highlight Napier’s political leanings, humour is an equally vital element in his work, both recorded and live – as reflected in his recent sideline career as a stand-up comedic. Hence his readiness to embrace not only the oft-disparaged label of folk singer, but also another, likewise timeless role: “I do love that old-fashioned, all-round idea of an ‘entertainer’,” he says. “But then that’s totally what the best folk singers are; they’ll have you in absolute hysterics, in between punching you in the gut – people like Loudon Wainwright, John Prine, Michael Marra: that’s the absolute pinnacle, as far as I’m concerned.”

Why are you involved in Scottish music?
Scottish music is part of my life and has been as long as I can remember. From early family parties and get togethers, through participating in Feis Spé to being in the first intake of the RCS Scottish Music degree in 1996 and forming a folk band Back of the Moon and touring the world Scottish Music continues to speak to me and informs my songwriting and live performances. It is a remarkable community and I a proud to be part of that and to represent our music at home and abroad.

What are your plans for the future?
I am making an album of Traditional Scottish Songs with Gillian Frame and Mike Vass called "The Ledger" due to be released in 2019. I am making an EP with English singer-songwriter Megan Henwood called "Story Song Scientists" which we're releasing to coincide with our March 2019 UK tour (loads of shows in Scotland). I have an official showcase at Folk Alliance International in Montreal. I'm involved in a songwriting project called "War and Peace" with Bella Hardy and Greg Russell writing songs about the end of World War One.