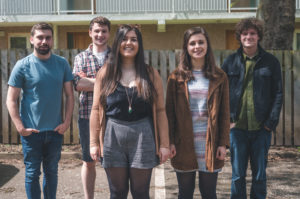 Congratulations to Eabhal who have been nominated in Up and Coming Artist of the Year sponsored by Royal Conservatoire of Scotland in the MG ALBA Scots Trad Music Awards 2018. Vote now!

We asked Nicky Kirk of Eabhal the following questions.

Tell us about yourself
Eabhal came together while based on the Isle of South Uist in the Outer Hebrides. Playing traditional music the band draws inspiration from many different cultures. After having performed as an instrumental act for three years the band were joined by Gaelic singer Kaitlin Ross a year ago.

Any particular career highlights?
Eabhal were recently named Hands up for Trad, Battle of the Folk Bands 2018 winners at Edinburgh Tradfest. Following that the band had a great summer of gigging and festivals including a week of performances at Festival Interceltique de Lorient

What are your plans for the future?
We're on the cusp of releasing our debut album, including a launch tour throughout the UK.