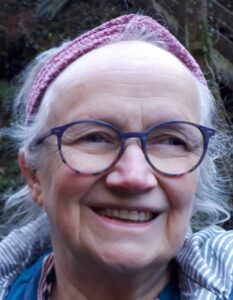 Ony particlar career heighlichts
There’s been monie a career heichlicht in teachin. Een in this hinnermaist year, I had a P6 class gettin Distinction in a Choral Speakin exam, actin oot Robert Garioch’s poem, Fibaw in the Street.
The Nicht Afore Chrismas buik cam aboot cause I’ve been involvit wi Scots poetry sae lang, I thocht I’d hae a crack at daen an owersettin. Rosie Cunningham, a Glesca artist, did the braw, colourfu illustrations. We gied Faither Yuletide, his reindeer and sleigh a Celtic/Icelandic/Shetlandic mak-ower, and set it, no in a wee kintra cottage, but in a Glesca tenement hoose, basin it in and aroon the National Trust for Scotland’s ane in Garnet Hill. I’m gey obleeged tae Paul Philippou an aa the fowk at Tippermuir Books wha helped us apply fir a Scots Language Publication Grant, and gey obleeged tae the Scottish Goverment and Scottish Boook Trust fir gien us ane!
And then, another heichlicht is that oor dochter, Ishbel, is noo a Scots campaigner anaa! She scrievit and performed aa ower the kintra, her play aboot Scots, O is for Hoolet. She wiz nominatit twa year syne as Scots Speaker o the Year at the Scots Language Awards.