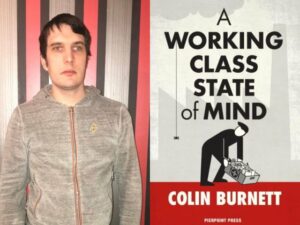 The book is a dark comedy that is baith political and social in nature. As much as ah want people tae find the book funny. Ah also want it tae come across as thoat provokin and that seems tae be the case wae the feedback ah've received fae readers. Another aim ae the book is tae engage the discipline ae sociology wae the wider workin class in a format that's maire enjoyable than a traditional textbook. Ah studied sociology at Queen Margaret University in Musselburgh and ma fiction comes under the genre ae sociological fiction.

The book hus received rave reviews since it's been released which me and ma publisher are delighted aboot. The central character in the book is cawed Aldo and he's been described as 'Begbie fur the Twitter generation'

Whit wis it got ye involvit wi the Scots leid?
Readin the works ae Jame Kelman and Irvine Welsh. But ma brother Michael Burnett who is a Scottish playwright who also writes in Scots wis the biggest influence oan me and it wis reading and watchin his plays that really encouraged me tae write in Scots.

Wha’s yer plans fir the days aheid?
Well ah'm goin tae be writin a follae up book and ma dream is tae bring Aldo and co tae screen yin day. Though this is a pipedream but yae never ken.