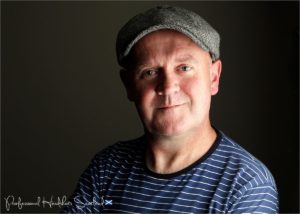 Congratulations to Stuart Paterson who has been nominated in Scots Speaker o the Year in the Scots Language Awards 2019. Vote now!

Tell us about yourself
I work full-time as a poet & writer & have heavily promoted Scots across the UK & beyond through my work in TV, online, in print & in the classroom. My first collection entirely in Scots, ‘Aye’, sold out in 2016. The CD of my works by noted Scots language archivists Scotsoun is currently on sale. I live in Galloway & visit schools through the Scottish Book Trust’s Live Literature scheme, much of this work focused on getting young people to write & express themselves in their own Scots. I also collaborate with other artists in music, painting, theatre & recently glasswork. Poetry, to me, should be accessible without being dumbed down, relevant without having to be jokey, for people and not AT people. Scots very nuch involves the poetry & music of people & place. It’s a privilege to be part of that.

Why are you involved in Scots language?
I was brought up & educated as a young working class guy in Kilmarnock, Ayrshire & consider Scots to be my first language. It’s the language we spoke in the house, in the playground, with family & pals, at work & in the howffs. It’s not English or ‘a dialect of English’ or slang. It’s a language, my language, our language. I work hard to promote its use not just in the arts but in everyday life, which I believe was one of the reasons I became BBC Scotland Poet in Residence in 2017. And I love working with young folk to let them know that their Scots is valid, treasured & a part of who they are. I’m not just involved in Scots language – it’s a big part of who I am.

Any particular career highlights?
The UK National Poetry Day 2017 theme was ‘Free The Word’ – I wrote ‘Here’sThe Weather’ & made this film for the BBC about Scots language – so far, it’s had over 300,000 hits & a brilliant worldwide response. Watch it here! https://www.bbc.co.uk/programmes/p05hdvgd
This summer, as part of the UNESCO Internarional Year of Indigenous Languages, I spent a month in South Africa working with hundreds of young people in university, schools & township & learning about their own native language, isiXhosa, & telling them about Scots. An amazing experience. We’ve plenty in common! Read more about it here! https://www.grocotts.co.za/2019/06/20/scots-meets-isixhosa-the-power-of-language/

What are your plans for the future?
I was overjoyed that renowned Scottish publisher Chapman recently received a Scottish Government grant to produce ‘Wheen’, my new & selected poems in Scots. And Tippermuir Books from Perth will be publishing a big, illustrated collection of my poems for weans, ‘A Squatter o Bairnrhymes an ither daftness’. I’m very excited to have started work as a SQA External Verifier in schools throughout Scotland on the SQA Scots Language Award, which raises the standing & profile of Scots as a subject of increasing academic recognition. I’ve lots of upcoming work with schoolweans & teachers in Scots through the Scottish Book Trust & have started developing a play about the amazing Isobel ‘Tibbie’ Pagan of ‘Ca’ The Yowes’ fame. And I’ll continue to advocate, wherever & whenever possible, for Scots as a language. A language of the everyday & everywhere, not just one day annually in January. Haud furrit!