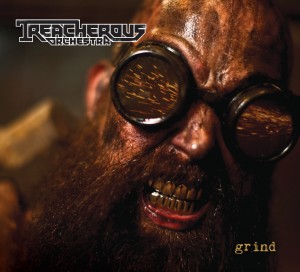 Congratulations to Treacherous Orchestra who’s album Grind has been nominated in Album of the Year (sponsored by Birnam CD) in the MG ALBA Scots Trad Music Awards 2015. Vote now!

We asked Treacherous Orchestra about their album Grind.

About Treacherous Orchestra
The Treacherous Orchestra story is one of many strands, a tale told spanning the length and breadth of Scotland. An un-definable collective force fusing people, concepts, styles and influences, shaping a musical supergroup that defies description. From the North to the South, East to the West they came, converging in the musical melting-pot of Glasgow, trading ideas over beers and playing music with ferocity, verve and passion. This is a tale of musical origins…

These roots and strands – the essence of the band – are the stories of the members themselves, all emerging from their own musical habitat and adding their own distinctive identity. The band is composed of seasoned musicians who are already treading notable paths and reaching international recognition with other bands as performers, arrangers and composers. Those bands that have gone before them, the likes of Martyn Bennett’s Cuilinn Music, Wolfstone, Peatbog Faeries, Shooglenifty and Salsa Celtica tell the tale of a country full of bright musical minds, ideas, innovation and evolution. It is a tale that continues with the rise of this epic Orchestra.

The sleepy region of Perthshire is where the first chapter unfolds. Unbeknown to them at the time, two young instrumentalists of the local scene were gaining notoriety as the fiercest young pipers of their generation. Ali Hutton and Ross Ainslie sat in a small cottage, fire crackling, eyes and ears transfixed by the learnings of one of the true master composers and instrumentalists of the 20th/21st century, the late Gordon Duncan. His style flowing from finger to finger trickled down and infused these two young protégés with a style and sense of harmony, rhythm and composition that no one else can claim to possess.

His passing away in 2005 left the legacy of his music and his influence will never be forgotten. Ross and Ali have since gone on to be heralded as individual instrumentalists in their own right playing in many of the great Scottish acts of the last decade. As the cottage fire crackled in Perthshire it was another “shire” to the north that shaped the identity of three other young musicians.

A one-legged crofter with a fondness for a good malt whisky was the inspiration for accordion player John Somerville. Musical gatherings in his parents house in the crofting hamlet of Abriachan, which lies high above the shores of Loch Ness, held the key to him taking up the instrument. With Angie Forregan in attendance a night of stories was always guaranteed but it was his accordion playing that John took to his heart deciding that the buttons, keys and bellows were for him. Born to a Czech mum and a Scottish father, it would always be difficult for him to completely hide his roots. Influenced by many styles of music, from West Highand Gaelic, to Eastern European, modern Funk to Techno, John developed his own unique style of accordion playing.

Adam Sutherland, was also raised on the shores of Loch Ness. From a small croft near the village of Errogie which sits above the loch’s south shores, he would travel to the north side to be taught under the watchful eye of late Highland fiddle legend Donald Riddle. Three years were spent going between Donald’s house in Clunes and his own amid a sea of half-made fiddles, playful kittens and a treasure of stories and tales. Described by Donald as a “promising” player Adam then went on to hone his skills with the world renowned Alasdair Fraser, embellishing his style and ornamentation. A bizarre combination of choral music and Led Zeppelin influenced his teenage years. Adam has been hailed as one of the pioneering Scottish fiddle players of this generation, always on the cutting edge, experimenting yet retaining the very source of his playing that lay in the traditions of his native Highland home.

Completing this trio of musical personalities is electric guitar player and Highland gentleman Barry “Spad” Reid. Growing up in Kilmorack, near Beauly, Barry started learning guitar from his father at the tender age 11. He would practise between his house and school being driven on by some of the contemporary guitar greats of that period. A rich and varied musical diet of Martyn Bennett, Miles Davis, Herbie Hancock, Goldie, Moving shadow, Mouth Music, Shooglenifty amongst others is responsible for Barry’s style, fusing all these influences with a fine knowledge of his instrument.

So it is here that we leave the Inverness connection and travel, as the crow flies, 30 miles South to the quaint Highland village of Grantown on Spey, home turf to another of the band’s members. We skip to Christmas nineteen eighty eight, with gleaming eyes and full of excitement, six year old Fraser Stone is under the brightly lit Christmas tree unwrapping the beginning of things to come. A plastic drum kit from his parents defined his musical heritage. Long hours and much energy were spent in his bedroom playing his humble collection of pots, pans and anything else he could find lying around. Eventually a fully-fledged kit replaced this, with Fraser constantly adding to his vast array of percussive instruments. He played along to bands such as Wolfstone, Shooglenifty, Santana, Hendrix, Guns n Roses and many of the Motown greats, hour upon hour spent developing his style, trying to emulate the feel of drummers such as Pete Erskine, John Bonham, Carter Beuford and Steve Gadd, the legends of that musical form.

From the West of Ireland, via Dublin, came a Banjo player by the name of Éamonn Coyne. An undeniably huge repertoire of session tunes and a unique deft plucking style were the hallmarks of a man that had travelled wide and earned his spurs playing with legendary purveyors of the instrument such as Béla Fleck and Alison Brown. But his first banjo influences stem from closer to home: a man from Co. Donegal in the North-West of Ireland and another from Birmingham (West Midlands, Englandshire!) via Galway and Mayo.

The Irish influence in the Orchestra was not just felt from the man whose origins lay in the Emerald Isle. Two other members of the band, who share the same surname – although both would decline any notion that they were anything other than musical brothers – also had roots in the West. Kevin O’Neill is an enigma of Glasgow, a man often found fronting sessions in all manner of venues across the city. His style, born of a fusion between Scottish and Irish playing is as fluid and meticulously controlled, as it is exhilarating to listen to. Born in the Royal Burgh of Rutherglen, Kevin is a true Glaswegian character, blending his fondness for the city’s hidden depths with a cartoon-like outlook on life.

Martin O’Neill, a former All-Ireland and All-Britain Bodhrán champion is a character of a different persuasion. A much-lauded musician in both the Irish and Scottish traditions his rhythmical style bears the roots of both these scenes. A random phone call from an unexpected location one afternoon was all it took for Martin to become part of legend Stevie Wonder’s band. Adding to a team of percussionists he toured with the band living and breathing life on the road with a true musical goliath.

The penultimate chapter of the story sees us shift to the Scottish heartland of Dunblane where a boy, fourteen years of age had just discovered a musical toy of a different kind. Duncan Lyall, TO’s bassist, had found at the back of a music room cupboard a four track recorder. This dusty piece of equipment, unwanted and unused would provide an inspiration for the young Bassist. He began recording and experimenting with musical lines, adding slowly, layer by layer, concocting arrangements, fusing melodies, bass lines and rhythms and it was this experimentation and intrinsic understanding of musical structure that paved the way for his future. Duncan has now appeared on over fifty albums and has several production credits to his name.

The final chapter in the Origins story sees us travelling to the very depths of the country. Birgham, merely a stones-throw from the English border, was where Innes Watson grew up and it is this area and its strong musical heritage that he took much inspiration from. At the tender age of four his dad flung a guitar into his hands and Innes, with ease like it was merely an extension of his young frame, began to play. It was this natural ability and enthusiasm for music and life that would cultivate him from learning a few simple notes and chords all that time ago to recently being hailed “Instrumentalist of the Year” at 2011’s Scots Trad Music Awards. Innes is one of many gifted young players that the flourishing Borders scene of the 1990’s produced; itself a wonderful renaissance arising from a sense of pride in the local culture.

And so, they all converged in Glasgow making their way to the bright lights whether it be for study, work or play. Great bastions such as 1159 Argyll St, The North Lodge Hostel, 50 Berkley Street, 10 Cleveland St and 514 Renfrew Street, housed and provided a roof for many. Long nights of playing tunes, composing, and pouring over notes were had, including many impromptu performances in venues across the city. Scarcely a square meal was ever afforded or cooked yet rich in glorious music and culture these strongholds were. Musicians and their compatriots all surviving in some sort of distorted harmony, playing music, and enjoying the freedom that life at that time gave.

And so it was that eventually the idea of turning these origins – these personal journeys – in to one whole came, and at Celtic Connections 2009, the Treacherous Orchestra was born. The electrifying atmosphere of a first gig. The monster was raring, breathing, waiting to be unleashed. A titanic vessel was to break free from its moorings.

What happened next was…

You can listen to Grind here.