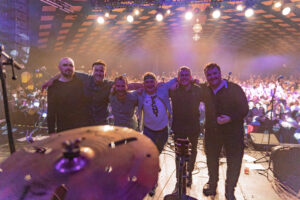 Congratulations to Trail West who has been nominated in Live Act of the Year sponsored by Greentrax Recordings in the MG ALBA Scots Trad Music Awards 2022. Vote for Trail West now!. It’s going to be another great night at the MG ALBA Scots Trad Music Awards on Sunday 4th December in Dundee’s Caird Hall. Why not join us for a brilliant night of music and awards. Buy a ticket here.

We asked Ian of Trail West the following questions.

Having started out as a four-piece line-up with strong links to the Hebridean Isles of Tiree and South Uist, Trail West now perform as a six-piece outfit with the addition of Jonathan Gillespie from Glasgow on keyboard and vocals along with Allan J Nairn from Ardnamurchan on electric guitar.

Why are you involved in Scottish music?
Trail West were formed in 2008 as a West Coast Ceilidh band, playing mainly on the Isles of Tiree and Coll but with occasional jaunts to the mainland and to other islands. Having seen other bands with Tiree connections – such as Gunna Sound, Skipinnish and Skerryvore – doing well in the traditional music scene, this gave us the confidence to pursue our hopes of performing throughout the country. The following year, the band’s original lineup decided to arrange a Summer Tour of the Highlands and Islands and from there, Trail West’s popularity rose.

There was a reshuffle of members around 2010 and this is when Alain Campbell and Seonaidh MacIntyre joined the band. Along with founding members, Andrew Findlater and Ian Smith, they decided that they would pursue a career in music with more commitment and the band have continued to go from strength to strength from that moment on.

All of our members, past and present, owe it to our tutors; to Fèisean nan Gaidheal and – for the members from Tiree – to the island’s other musicians who paved the way for us to follow in their footsteps.

Any particular career highlights?
Our career highlight to date is, without a doubt, two successive years of sell-out shows at the 1900-capacity Barrowland Ballroom in Glasgow, the first of which was a celebration of Ten Years of Trail West.

What are your plans for the future?
This year has been fantastic for Trail West. Getting back to a summer of festivals along with a run of our own sell-out shows in the Barrowlands in Glasgow and the Corran Halls in Oban, with the Ironworks in Inverness set to follow suit.

We now look forward to our remaining shows of the year at Hoolie in the Hydro in Glasgow, Talla an Iochdair in South Uist, Las in Portree for Hogmanay and then our first show of 2023 in Fort William with Skerryvore on 2nd January.

The rest of 2023 looks set to continue the progress we’ve made this year with more of our own shows along with some exciting festival performances throughout the year.