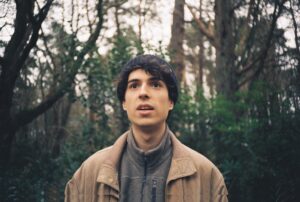 Congratulations to Lewis McLaughlin who has been nominated in Up and Coming Artist of the Year sponsored by Royal Conservatoire of Scotland in the MG ALBA Scots Trad Music Awards 2022. Vote for Lewis McLaughlin now!. It’s going to be another great night at the MG ALBA Scots Trad Music Awards on Sunday 4th December in Dundee’s Caird Hall. Why not join us for a brilliant night of music and awards. Buy a ticket here.

We asked Lewis of Lewis McLaughlin the following questions.

Tell us about yourself
Edinburgh-born Lewis McLaughlin was inspired by the likes of John Martyn and Villagers to begin writing and recording his own songs. He has performed across Europe in various outfits, accompanying his father at folk shows and playing with his brother in a folk duo before going solo.

He currently lives in Glasgow, and has just released his debut album, on Andy Monaghan’s (Frightened Rabbit) Monohands Records. Lewis has performed at various festivals with his solo project including Glastonbury, Belladrum, Otherlands and Connect.

He has been championed by various BBC Radio Scotland shows, the Zoe Ball breakfast show, and has appeared on TV as part of BBC 2’s coverage of Glastonbury 2022. He has been featured by the likes of NME and Rolling Stone UK.

Rollin’ On, the new EP, comes quickly after winning the Glastonbury Emerging Talent Competition and follows a packed summer of festival performances across the UK. Monohands Records present this raw dynamic EP, widening the landscape of McLaughlins cinematic approach to songwriting.

Any particular career highlights?
I won the Glastonbury Emerging talent competition this year, which meant that me and my band got to go down and play (four times) at the biggest music festival in the world! So that was pretty epic. Also releasing my debut album back in March has been a big highlight for me. I just did my first Scottish tour with my trio in October, it felt great to get out on the road across the country for the first time!

What are your plans for the future?
I have my biggest headline show so far in January at the CCA as part of Celtic Connections, following that I plan to get out the country with my live show next year, and continue to write and record new music with Andy and my band.