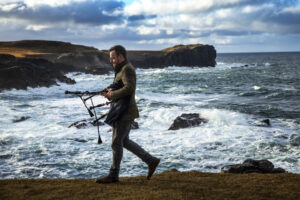 Congratulations to James Duncan Mackenzie who has been nominated in Composer of the Year sponsored by PRS for Music in the MG ALBA Scots Trad Music Awards 2022. Vote for James Duncan Mackenzie now!. It’s going to be another great night at the MG ALBA Scots Trad Music Awards on Sunday 4th December in Dundee’s Caird Hall. Why not join us for a brilliant night of music and awards. Buy a ticket here.

We asked James of James Duncan Mackenzie the following questions.

Tell us about yourself
Hi, Im a piper and wooden flute player from the Isle of Lewis. I'm also a keen tune writer. To date I've released three solo albums and a book of tunes. Having lived in Glasgow for many years, I returned to Lewis a few years ago and now live on the West side of the Island in the village of Shawbost, famous for its Harris Tweed production amongst other things!

Why are you involved in Scottish music?
I'm passionate about traditional Scottish music and have been from a young age. Pipes have always been my main instrument and growing up in Lewis learning traditional pipe music as well as more 'modern' tunes by the likes of Pipe Major Donald Macleod and Peter R Macleod really drew me in. Tuition from the late Pipe Major Iain Murdo Morrison as well as others has had a huge influence on shaping me as a musician.

Any particular career highlights?
I've been very fortunate to have played music and toured in many countries around the world. I was previously a member of the folk band Breabach for around a decade and in that time had many amazing experiences and gigs.

One particular stand out gig with my solo project was when I was invited to play at the MIMO festival in Brazil. It was a real privilege to play at this festival. Closer to home, I've played at Hebcelt, Piping Live and Celtic Connections several times over the years and have always enjoy being part of these festivals.