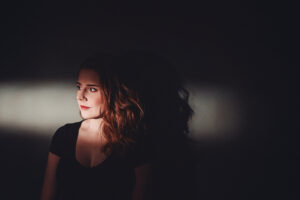 Congratulations to Hannah Rarity who has been nominated in Album of the Year sponsored by Birnam CD in the MG ALBA Scots Trad Music Awards 2022. Vote for Hannah Rarity now!. It’s going to be another great night at the MG ALBA Scots Trad Music Awards on Sunday 4th December in Dundee’s Caird Hall. Why not join us for a brilliant night of music and awards. Buy a ticket here.

We asked Hannah of Hannah Rarity the following questions.

Tell us about yourself
I'm a Scottish folk singer-songwriter based in Glasgow.

Why are you involved in Scottish music?
Although I always knew I wanted to sing I wasn't quite sure where I fit in terms of style and genre. I discovered Scottish music and folk song later in life. The creativity and inclusiveness of the folk scene are what initially drew me to it. I thrive on performing and creating music with the brilliant peers and friends I've found since those early days.

Any particular career highlights?
I've been extremely fortunate to have a range of really valuable, special experiences performing, touring and travelling since I began, but making my most recent album with Innes White, Iain Hutchison and co, experimenting with sounds and trying to capture special moments, is up there at the top.

What are your plans for the future?
To make more music! It's been a rough time for everyone, and I was tempted to pack it all in before things started getting better this year post-covid, but releasing the album and gigging this summer has reminded me why I chose to do this – and to keep going.