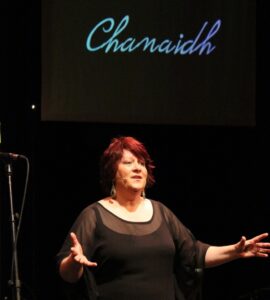 Congratulations to Fiona J Mackenzie who has been nominated in Gaelic Singer of the Year sponsored by The Highland Society of London in the MG ALBA Scots Trad Music Awards 2022. Vote for Fiona J Mackenzie now!. It’s going to be another great night at the MG ALBA Scots Trad Music Awards on Sunday 4th December in Dundee’s Caird Hall. Why not join us for a brilliant night of music and awards. Buy a ticket here.

We asked Fiona of Fiona J Mackenzie the following questions.

Tell us about yourself
I am a Gaelic singer, living and working in a unique location, looking after a unique and world renowned collection of Gaelic song & folklore on the Island of Canna. These collections have been at the heart of my singing for the last 30 years but I have only been on Canna for nearly 8 years.

Why are you involved in Scottish music?
I was brought up in Morayshire, listening to my granny and grandpa playing Bothy Ballads on the spoons and banjo and then to my father singing and playing the Corries, and Eric Bogle at Ceilidhs and Burns Suppers throughout the Highlands. My other grandfather Duncan, was a Church of Scotland minister and was well known in the Central Belt in wartime, as the Singing Minister, although I have never heard his voice as he died before I was born. I was always a singer myself but it was only when I moved to the North Highlands myself as an adult that I began singing in Gaelic. It quickly became my career, whilst bringing our children up as first language Gaelic speakers, and was completely natural to me, despite not being brought up in a Gaelic speaking household. Music of all forms is at the heart of my life but Gaelic is my 'natural' place.

Any particular career highlights?
When I began singing in Gaelic, it was mainly though choral singing but that quickly led on to solo singing and also competing at the Mod. It was the impetus to learn repertoire for the Mod that gave me the drive to learn Gaelic as an adult and winning the Gold medal, in Stornoway ( as a learner!) remains one of the highlights of my professional life. Also major highlights were performing a Gaelic song at an Estonian Song Grounds Festival to over 6000 people and a concert at the Library of Congress in Washington. Grandfather Mountain Highland Games in North Carolina was also certainly an experience as was delivering a song lecture more recently at Harvard University! Away from the traditional side of my singing, was the defining experience of winning a place in the Burnsong House with 9 other songwriters. As the first Gaelic songwriter in the House, this started me on a path which saw me becoming a member of the fabulous Kilmarnock Edition with some of my songwriter heroes! Giving me confidence as a Gaelic songwriter, KE led me onto study at University of the West of Scotland for a Masters in Songwriting & Performance, the first Gaelic writer to do so- a fact that gave Davie Scott more than one headache or two! But now my main highlight is having the privilege of looking after the incredible Campbell Collections of Folklore and Song- my Gaelic dream come true. Is is the voices of the contributors who are the real heroes of the Gaelic folklore world- we couldn't do what we do today without their voices, couldn't sing the songs we sing. So it is an honour for me to get a chance to shine the spotlight on their voices and stories. That is the true pinnacle of my career as a Gaelic singer.

What are your plans for the future?
Releasing "Tac an Teine" was the album I had wanted to achieve since I went to live on Canna. I hope to bring the treasures of the sound archive to more audiences and demonstrate what we can do with them. It is not about me as a singer but about the contributors and that is the message I want to pass onto audiences everywhere. I also have developed a taste of presenting for broadcast- TV and radio, and hope to find more opportunities to do that in the near future. In the meantime I am writing the biography of Margaret Fay Shaw who would be astounded that the songs she collected and manually transcribed so beautifully for us today are still being sung on both the biggest and the smallest stages in the world!