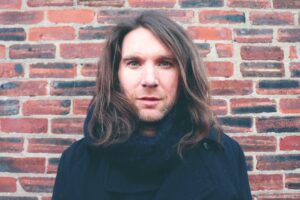 Congratulations to Duncan Lyall who has been nominated in Music Producer of the Year in the MG ALBA Scots Trad Music Awards 2022. Vote for Duncan Lyall now!. It’s going to be another great night at the MG ALBA Scots Trad Music Awards on Sunday 4th December in Dundee’s Caird Hall. Why not join us for a brilliant night of music and awards. Buy a ticket here.

We asked Duncan of Duncan Lyall the following questions.

Tell us about yourself
I am the band leader for various projects under my own name, I am the bass player for English folk singer Kate Rusby, a member of the Scottish classical/jazz/folk crossover GRIT Orchestra, and I perform regularly with Blue Rose Code, Jarlath Henderson, Damien O’Kane, Lori Watson and Ross Ainslie & Ali Hutton. I was a founding member of and significant driving force behind Scottish folk fusion group Treacherous Orchestra.
I have regular invitations to work with an array of world-renowned musicians. Highlights include recording with Mark Knopfler, performing and recording with film composer Craig Armstrong, touring the UK with Mary Chapin Carpenter, conductor/arranger Vince Mendoza and legendary drummer Peter Erskine, performing with Guy Garvey at the Radio 2 Folk Awards, and performing and recording with bluegrass stars Ron Block (Alison Krauss & Union Station), Aoife O’Donovan (Crooked Still) and Sarah Jarosz (I’m With Her).
I have performed and recorded nationally and internationally with an illustrious list of folk & traditional musicians and groups including:
Julie Fowlis, Phil Cunningham, Cathy Jordan, Michael McGoldrick, Donald Shaw, John McCusker, Blazin Fiddles, John Doyle, Bella Hardy, Rachel Sermanni, Kris Drever, Adam Holmes, Emily Smith, Jenna Reid, Fred Morrison, Unusual Suspects, John Goldie.
I am in demand as a producer and session musician. I have featured on over 70 albums, while my production work includes the latest album from Elephant Sessions For The Night, Scots Trad Awards album of the year 2015 and Scottish Album of the Year 2015 Longlisted Grind by Treacherous Orchestra, Scottish Album of the Year 2016 Longlisted Hearts Broken, Head’s Turned by Jarlath Henderson, as well as albums from The Shee, Boreas, Breabach, Lori Watson, Ross Ainslie, Box Club and Maeve MacKinnon.
My debut large scale composition Infinite Reflections was performed as part of the Celtic Connections festival New Voices series, leading to a nomination as “Composer of the Year” at the Scots Trad Music Awards. An album recording of this piece was released in January 2013 to critical acclaim under my own record label, Red Deer Records. I subsequently went on to tour this album around the UK with a 9 piece band. Celtic Connections 2019 saw the debut of my new project, Milestone, a natural progression from Infinite Reflections which features a cast of some of Scotland’s top traditional and jazz musicians. An album recording of Milestone was released in July 2021 to widespread critical acclaim and was subsequently nominated for the prestigious “Album of the Year” at the Scots Trad Music Awards and selected from the record breaking 369 albums submitted as one of the 20 strong Longlist at the Scottish Album of the Year Awards.
In 2021 I was commissioned to create a musical score to accompany a visual art exhibition at Tolbooth Stirling. Titled A Tale of Tolbooth, both the score and the artworks took inspiration from the story of Tolbooth. The piece, composed, produced and recorded at my studio Red Deer Studios, was released as an EP in 2021, and the debut live performance took place at Tolbooth in June 2022.
I was appointed Musical Director for the 2019 Edinburgh Fringe Festival show, This Is Caledonian Soul, featuring Eddi Reader, Karen Matheson, John Douglas, Robert Vincent and Blue Rose Code and thirteen piece band.
“In traditional music, with its myriad, deceptively demanding metrical nuances, bass players with the finesse to lift and enhance – rather than weigh down and deaden – a tune or song are rare and highly prized: hence Duncan Lyall… is a very busy man” Sue Wilson, Sunday Herald
“Duncan Lyall is an extraordinary talent…this is evidence of pure genius at work.” The Living Tradition
***** “engrossing instrumental sequence from ubiquitous folk bassist Duncan Lyall” Jim Gilchrist, The Scotsman
“…clearly the product of a wide and profound musical intelligence… this is progressive contemporary music at its best… passages of tranquil beauty, arresting ambience and soaring dynamic interest. All is so finely calibrated and perfectly composed for cinematic soundscape and concert music” Kevin T.Ward, The Living Tradition
“This is contemporary Scottish folk music of the first order, resplendent in a big band sound” Neil King, Fatea

Why are you involved in Scottish music?
I am passionate about the traditional arts in Scotland, I feel and understand the relationships between song and story, movement, and rhythm. At the age of one month, I attended performances by Ossian, Silly Wizard and Cilla Fisher: I was born to folk revivalist parents involved in clubs and festivals. Naturally, the traditional music of Scotland became the foundation of my artistic work as musician, collaborator, composer, studio engineer and producer, which I have developed to the highest international levels working across multiple genres and with some of the finest artists of our time.

Any particular career highlights?
As a producer, working with Elephant Sessions on their album "For the Night" has been a particular highlight, as well as producing Jarlath Henderson's "Hearts Broken, Heads Turned", and Treacherous Orchestra's "Grind". Crafting music in the studio is such an exciting and inspiring process so any time spent producing is a highlight for me!

What are your plans for the future?
I plan to record and release more of my own music in the next year, and I will return to the studio to produce an album with the brilliant Ciaran Ryan Band.